The 2022 NSW Pearcey Entrepreneur of the Year award was presented to Dr. Mark Englund of FiberSense, by David Thodey, AO, on October 31 at the Sydney Startup Hub.

Founded in 2015, FiberSense provides SONAR like sensing capabilities over optical fiber telecoms cables, providing awareness of objects and events near the fibre cable infrastructure, and acquired by customers “as a service”. The service is being taken up by the world’s most valuable companies including Amazon, Google and Meta. FiberSense has recently won a series of awards including the 2022 CommsDay Eddison Awards and annual Acomm award. Mark and the FiberSense team have raised a total of $55 million in funding from high profile US and Australian investors, including Bevan Slattery. FibreSense is growing rapidly, now consisting of over 50 staff across Australia, US, NZ and Singapore.

Commenting on the award, Benjamin Chong, partner at Right Click Capital and chair of the NSW Pearcey judging committee, said:

Our judging committee was impressed by Mark’s ability to leverage his own domain expertise both to commercialise deep technology and bring technology research to life. The solutions he and his team have developed at FiberSense are positively impacting society and inspiring technologists.”

The Pearcey Foundation ran the special event at the Sydney Startup Hub. The event attracted over 50 people with many special guests.

David Thodey AO, presented the 2022 NSW Entrepreneur Award to Dr Mark Englund noting the long road that entrepreneurs travel to meet their aspirations. David Thodey also gave tributes to the other finalists James and Robbie Ferguson of Immutable, Rupert Taylor-Price of Vault Cloud, Siobhan Savage, of Reejig, and Justus Hammer, from Mad Paws, who all will be entered into the Pearcey NSW Hall of Fame.

Also at the event was a lively panel discussion that sought to uncover "Where the next wave of entrepreneurs will come from" was held, with David Thodey, AO, Jo Burston of Job Capital, Andrea Gardiner of Jelix, and Wayne Fitzimmons, OAM, National Pearcey Chair.

Dr Mark Englund is a highly successful Australian serial entrepreneur with both deep technical expertise and strong business skills. In particular, Mark has pioneered some cutting-edge technology that has opened up an entirely new field of applications to solve important and large-scale problems.

Darwin-born and raised, Mark has always been fascinated with technology. He is an engineering graduate of Charles Darwin University, and says that he was "fortunate to have parents who promoted the value in education, thinking big and backing yourself".

In 1995, Mark relocated to Adelaide to work at the Defence Science and Technology Organisation (DSTO) in Sound Navigation and Ranging (SONAR), specifically Optical Fibre Sensors. Here he was selected to secondment to the United States of America’s Naval Research Laboratory in Washington DC.

After working in the US and Europe, Mark returned to Sydney in 2015 and founded FibreSense. FiberSense leverages existing fibre optic lines already installed in cities, the countryside and undersea, turning them into a massive distributed vibration sensing network. Their patented wide-area sensor system is called VIDAR (vibration detection and ranging). VIDAR captures in real-time the tiny vibrations from anything that moves, including earth tremors, planes, boats, cars, people and even drills, across large geographical grids that have fibre-optic cables.

The vibration readings are then analysed and categorised on FiberSense’s digital platform, called SuperSoniQ, which it provides to clients as a subscription cloud-based service. The technology is revolutionary in its broad range of applications. For example, being able to detect burst water mains, warn if excavation gets too close to high-voltage underground cables, analyse transport flows, track criminal activity, and provide early-warning predictions of earthquakes and tsunamis.

Mark and the FiberSense team have raised a total of $55 million in funding from high profile US and Australian investors, including Bevan Slattery. Today, FiberSense is valued at around $250 million with teams and deployments across 15 cities and 8 countries. FibreSense has grown to provide global operations serving critical infrastructure asset operators across the Asia Pacific, Americas, Europe, India and Africa with customers covering Fortune 500 companies as well as national utility operators.

FiberSense has recently won a series of awards for its asset protection products in the 2022 CommsDay Edison Awards and the peak telecoms industry annual Acomm Awards. FiberSense was runner-up for Best Subsea Innovation at the 2022 Global Carrier Awards. FibreSense recently announced a three-month field trial with nbn® exploring the use of FiberSense DigitalAsset sensing services to detect certain vibrational frequencies on fibre, along with artificial intelligence to determine whether the activities causing those vibrations are likely to cause accidental damage.

We are thrilled by the rapid growth in demand for our sensing capability amongst telecoms operators. The nbn trial marks a further step forward in meeting our aspirations to scale globally.  We aim to be operating on all the world's preeminent fibre networks and Australia's nbn is certainly recognised as one of the 'best of the best' amongst other national operators.

Mark's enthusiasm, clear focus and ambition is tempered by a deep commitment to the personal and human elements of building businesses and taking people along the entrepreneurial journey. As a result, he builds teams that model both the passion and caring that helps propel these deep-tech achievements for Australia and success in now taking on the rest of the world.

Mark has also been a mentor to first-time start up founders and undergraduate engineering students over the years. His commitment to rewarding high-quality academic achievement is seen directly in the almost 20% of the FiberSense team having masters or PhD qualifications. In industry, Mark is a passionate advocate for commercialising the opportunities arising from focused research.

The Pearcey Foundation is most appreciative of our loyal sponsors.

If you would like to sponsor future events, please get in touch. 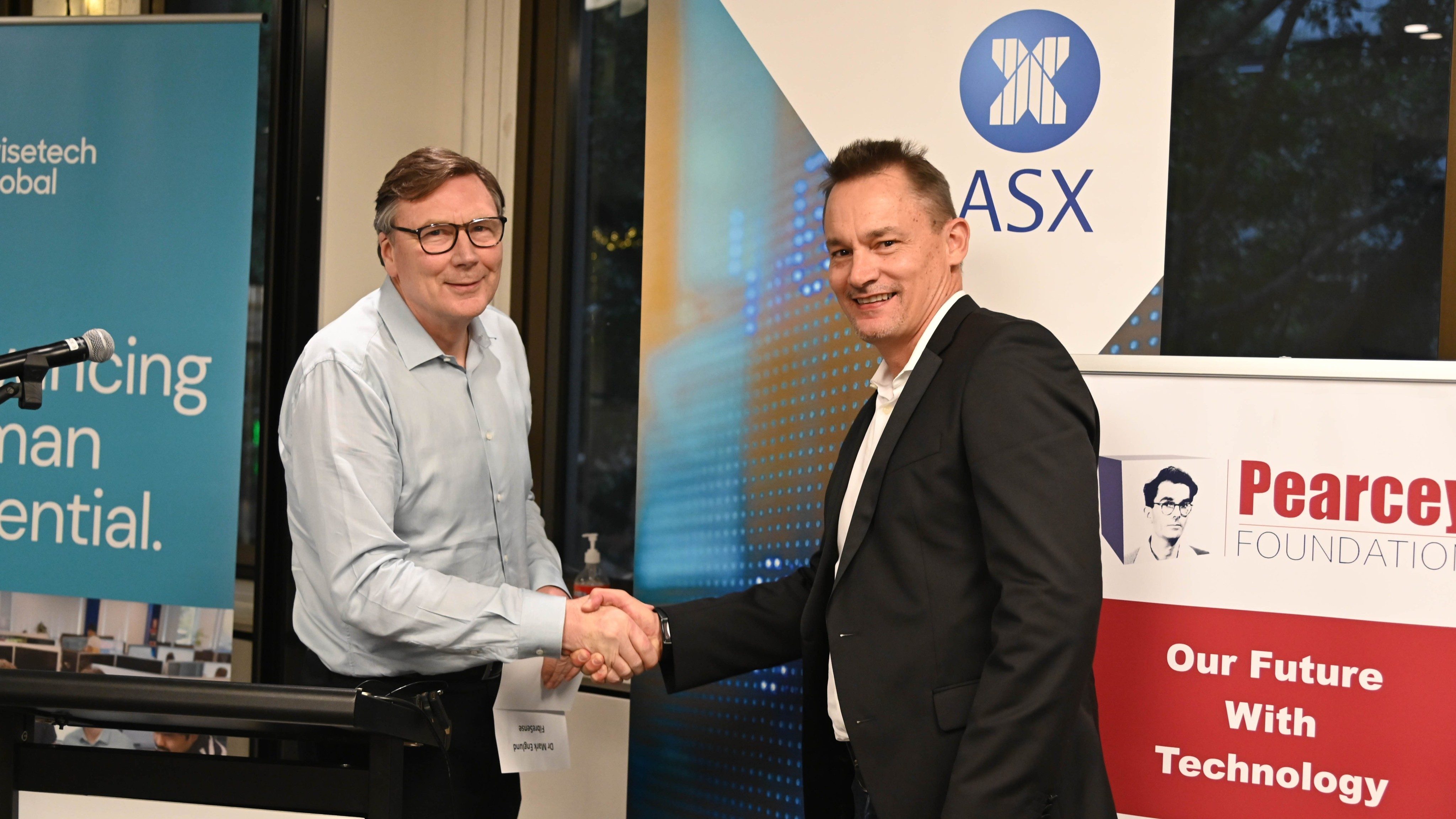