The 2017 NSW Pearcey Tech Entrepreneur of the Year was awarded to Airtasker co-founders Tim Fung and Jonathan Lui. Several other Awards were presented in a packed PowerHouse Museum on Tuesday October 24. The Pearcey award was presented by Chairman of Jobs for NSW and Chair of CSIRO David Thodey.

It was a great night and wonderful to see the quality of the entrepreneurs and next generation coming through. The Pearcey Foundation and the ACS need to be congratulated for the incredible work they have done over many years to promote and celebrate great innovation and entrepreneurship in our Australian ICT industry.

The evening celebrated ICT entrepreneurship in NSW in 2017 at three levels:

Previous winners of the awards, held since 1999, are a "who's who" of almost 100 talented entrepreneurs including the founders of Atlassian, Big Commerce, WiseTech Global, Campaign Monitor, Freelancer, Google Maps, MenuLog, PC Tools, Society One and Vocus to name but a few.

The 2017 Pearcey Tech Entrepreneur of the Year was awarded to Airtasker co-founders Tim Fung and Jonathan Lui. 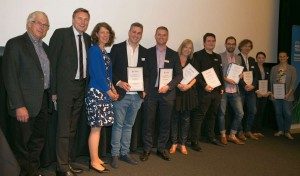 The following NSW entrepreneurs were induced into the Hall of Fame for "taking a risk", "making a difference" and "being an inspiration":

Photo: Entrants in the Pearcey NSW Pitching competition, with Richard White of WiseTechGlobal 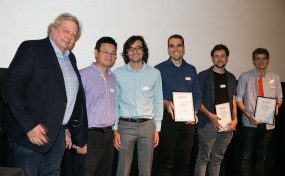 Students from 5 NSW based Universities participated in a pitching competition.

The winner was RoboMotion from the University of Wollongong, co-founded by Andrew Short, Nathan Larkin and Zangxi Pan.

Second place went to Rapid Phenotyping from the University of Newcastle, presented by Anthony Martin.

Third place went to Geoff Bullen of Wallsync from UTS.


Photo: Young ICT Explorer presenters, with Liz Jakubowski of CSIRO and Rory Cunningham of the ASX. 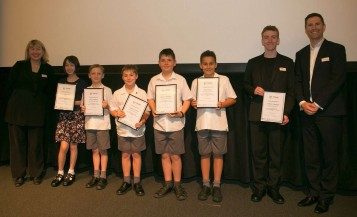 The NSW Pearcey committee would like to thank the following generous sponsors: