On 23th October 2013 the 2013 NSW Pearcey Entrepreneur of the Year Awards were presented by Mr Paul Toole, Parliamentary Secretary for the Deputy Premier, to joint winners Simon Clausen, founder of Startive Ventures and PC Tools, and Naomi Simson, founder of Red Balloon.

The awards were held at NSW Parliament in front of 180 leaders of the ICT and Digital Media industries, to celebrate technology entrepreneurship in NSW, expose the wealth of talent, and encourage others to do the same.

"This year's winners and finalists have been selected by industry peers for their outstanding efforts to contribute to NSW." Mr Paul Toole MP said. "The digital revolution is well underway and our digital capability has quickly become a critical tool for the sustainability of many, if not all, businesses."

Head of the Judges and Bulletproof Networks founder Anthony Woodward said: This year we had an amazing array of nominations, all highly successful entrepreneurs and great role models in different ways. The votes of the judges, all previous winners, were finely balanced across all the Hall of Fame recipients (see below). Simon and Naomi won by the narrowest of margins".

"Simon (Clausen) shot to attention when his business PC Tools, which he founded in 1998 with Peter McKow, received a $20m investment from James Packer in 2005 for a 20% stake. In 2008 it was acquired by Symantec for $300m. After this Simon started Startive Ventures, with an early investment being the backing of Matt Barrie and Freelancer. We know this isn't the last we will hear from Simon and he has a lot to offer through Startive Ventures in the future. 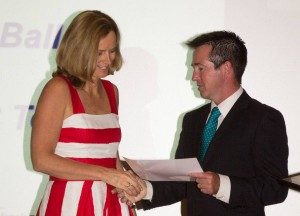 "Naomi's (Simson) entrepreneurial career started in 1997 when she founded Bright Marketing. She started Red Balloon in 2001, now a leader in the online gifts marketplace. It took 10 years for Red Balloon to issue 1 million gift vouchers, but the 2nd million has just been achieved (October) in only two years. In addition, in 2013, BRW Magazine voted Red Balloon one of Australia's best places to work for the 5th year running. Naomi is a great role model for female entrepreneurs."

For a photograph gallery of the night, see here.

In addition to the winners, Special Recognition Awards were given to recognise the very significant achievements of 13 entrepreneurs including:

Dr Michelle Deaker, Chair of the Pitching Judging Panel and Managing Partner for One Ventures and said 'The students prove there is a great spirit of entrepreneurship in Australian universities. They show we have depth and vibrancy: budding entrepreneurs with burning aspirations and business ideas of great promise".

The pitching competition was won by Hassan Ahmad (UNSW) with his business Conscious Step, with 2nd place going to Toby Li (UNSW) for Re:Align and 3rd place to Felix Lawrence (University Sydney) with Speakeasy.

About the Entrepreneur Award

The NSW ICT Entrepreneur Awards are awarded annually to the most outstanding ICT and digital media entrepreneurs, through an open peer recognition system.