The September 1999, the New South Wales Pearcey Award was presented to Scott Gazzard.

The Pearcey Awards commemorate the work of Trevor Pearcey, the Australian builder of the world's fourth, and Australia's first, electronic computer.

The NSW Government Office of Information Technology is the Principal Sponsor of the NSW Pearcey Award. The Award Sponsors also include Sydney University and The Australian Computer Society.

Speaking at the Award presentation, Pearcey Foundation Chairman, Ian Dennis, said, "It is fitting that the first NSW Pearcey Award should be awarded to someone who has not only satisfied the selection criteria, but also has started the process of creating a commercial outcome from this work."

Our winner was nominated and selected as a person who, like Trevor Pearcey, has by hard work, intelligence, and dedication, made a major early contribution to Australia's and the world's IT industry and research and gives us a further example of what Australian's can and have achieved in information technology. 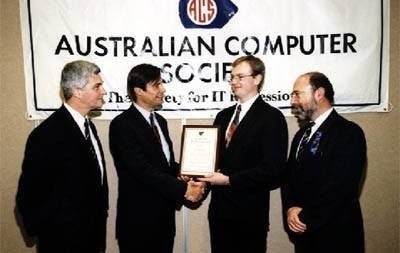