The 2011 NSW ICT Entrepreneur of the Year award was presented to Simon Poole and Steve Frisken, founders of optical communications company Engana and now Finisar Australia by the Hon Andrew Stoner MP, NSW Deputy Premier in front of over 150 industry leaders. The event was held at NSW Parliament on Wednesday 12th October 2011 in Sydney.

"There is a great spirit of entrepreneurship in Australia, as proven by this year's batch of winners, and celebrated through tonight's awards. We can complain that it's all too hard, but these people are out there, building great businesses, and proving that it isn't," said the debate chair Mark Jones of Filtered Media and the Australian Financial Review.

This evening's winners will be finalists in the combined Pearcey, AIIA and ACS Benson National Entrepreneurs iAward, to be held in Melbourne in 2012. Last year Lars and Jens Rasmussen in 2011 won the NSW award and went on to win the national award.

"For both individuals, Engana/Finisar is their second entrepreneurial achievement. Simon launched Indx out of the Photonics CRC in 1995, and subsequently sold it to JDS Uniphase, building the team to 300 people. Steve was cofounder of Photonic Technologies, which Nortel acquired for $62m in 2000."

"Together in 2001, Simon and Steve founded Engana, raised $13m in VC funding, and were acquired by US communications firm Optium in 2006 for $43m. Optium was subsequently acquired by Finisar in 2008."
"Simon and Steve have built their operations from seven people in 2001 to nearly 300 people, in state-of-the-art manufacturing and development facilities in Waterloo, Sydney, with export revenues in excess of $200m."

"Simon and Steve continue to innovate inside Finisar, developing industry-leading optical communications technologies that sit at the heart of networks such as Australia's National Broadband Network."

The Pearcey Foundation has once again proven Australia has innovators equal to the world's best, and with the global reach of the internet, our innovators can fully capitalise on their capabilities and conquer the world.

"Simon and Steve have positioned Australia as a global leader in optical communication technologies" said Dr Dean Economou, Technology Strategist at NICTA and chair of the judges. "They started life as publicly funded researchers and are a great example of how local University research can have global impact. What better example of entrepreneurship and innovation can you get?"

"This is peer-recognition. The talent in NSW is so rich that our judges (mainly previous winners) had a very difficult time choosing Simon and Steve over the other nominees. They are first amongst equals," Dr Economou continued, "and we are delighted to give special recognition awards to ALL the finalists, and induct them into our entrepreneurs hall of fame.

A further 9 entrepreneurs received special recognition awards and were inducted into our Living Hall of Fame.

Colin Fabig Jump On It

Founded daily deals/group buying site Jump On It in January 2010 with James Gilbert and Adam Rigby, selling a majority stake to US "major" Living Social in November 2010 for $5m.

A tireless entrepreneur supporter, Dean spotted a hole in the local market and in February 2010 launched daily deals site Spreets. Dean sold Spreets to Yahoo in January 2011 for around $30m+.

Dean's first entrepreneurial venture was a bar and restaurant which sold in 2003. His second, online restaurant reservation system, Booking Angel was nominated as one of the top 100 startups in Silicon Valley in 2007.

Hamish bootstrapped online ticketing business Moshtix in 2002 and sold the business to News Limited in Dec 2007 for an amount believed to be around $10m. More recently, Hamish has launched Ingogo, a taxi booking and payments business - disrupting the current taxi booking/payments business model. Hamish is also an angel investor.

An internet service provider (ISP) pioneer, Jason founded of ASX listed wireless carrier, BigAir in 2002. BigAir owns and operates one of the largest and most advanced metropolitan fixed wireless broadband networks in Australia. Previously he helped launch the ISP industry through Magna Data, a leading Internet infrastructure provider before its acquisition in 1999 by (now defunct) Davnet. Jason is a foundation member of the Alliance for Affordable Broadband.

Karaline founded The Wedding List Company with her husband George in 2003; from a primarily "off-line" business. She has built a significant on-line presence; expanded the business model to personalize wedding sites for individual weddings, capturing all the activities and logistic associated with a wedding. An outstanding example of female entrepreneurship, she has sought to disrupt traditional retail business models by focusing on the customer experience.

Women upload images of good-quality but unwanted outfits and sell them with a virtual currency called "buttons." 99dresses was launched via Facebook and within 2 weeks, 20,000 women had been invited. Durkin first business success was a "vampire" T-shirt business at the age of 15, when she got ahead of the "Twilight" merchandise wave and made a killing off some vampy tees. "I was ranked No. 2 on an Australian Google search for 'twilight shirts.' I was a very rich little schoolkid," she says.

An Israeli computer scientist, Ori moved to Australia in 2002 where, funded by an ARC grant, he completed his PhD in search technologies, He also became an Australian citizen. Google acquired Ori's patented thesis work called Orion in 2006, and his algorithms are now in Google's search engine. Now in New York, Ori left Google in 2010 to start Julpan, hiring a number of Aussies in the process.

The ICT Entrepreneur of the Year award was supported by VMware, NSW Trade and Investment, NICTA and the CSIRO ICT Centre.

A big thank you to our sponsors for this year: 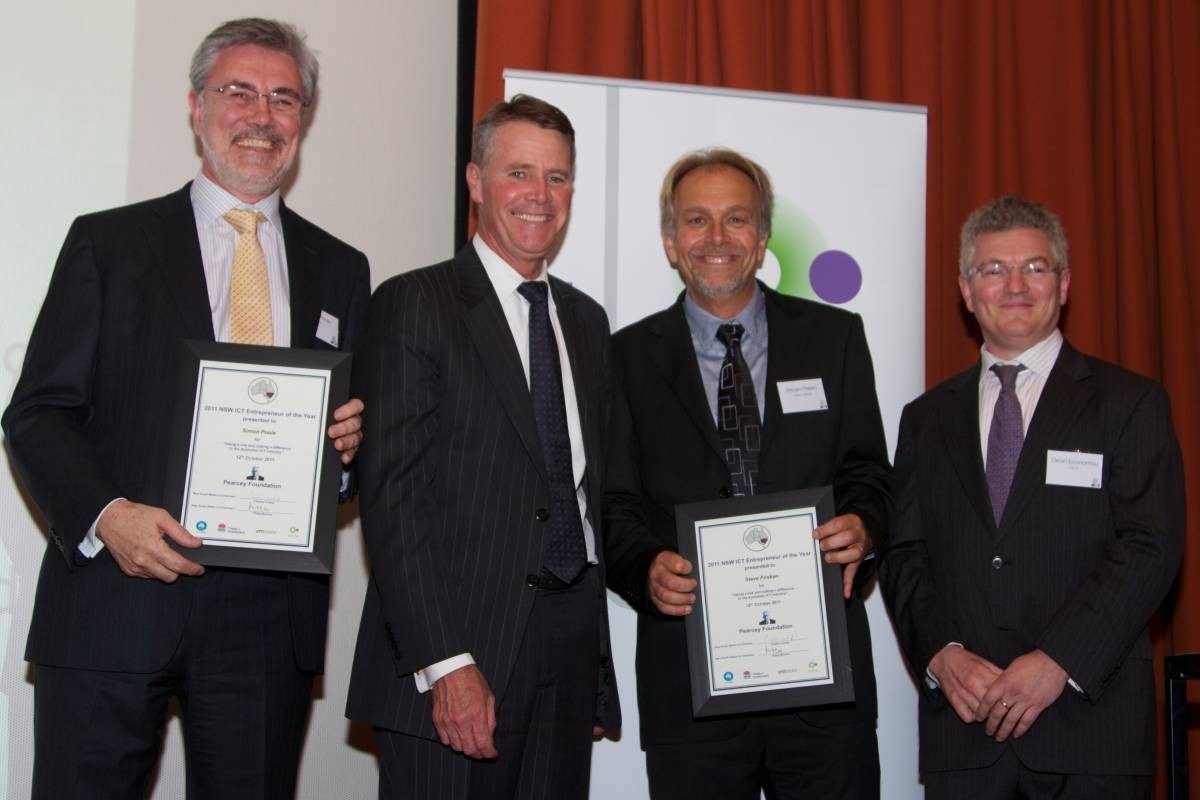