The 2004 NSW State Pearcey Award was presented to Hugh Durrant-Whyte, by Loftus Harris, Director General of the NSW Department of State and Regional Development, on behalf of Minister John Della Bosca.

The presentation was made at the 2004 Pearcey Medal Dinner held on 4th November 2004.

The centre has over 130 research staff and PHD students.

As its entrepreneurial leader, Hugh has led the centre to secure a total of $30m funding, mainly from competitive selection sources and industry.

Amongst his voluntary activities, Hugh teaches robotics at Primary Schools.

A Federation Fellow, Hugh has achieved many citations and awards for his academic achievements - but this is not why Hugh was short listed for the Pearcey award.

What impressed the judges was the way in which Hugh, as a leading ICT researcher, engaged with industry.

The judges felt Hugh was a role model for NICTA, CSIRO and other leading ICT research centres in NSW, to ensure that business productivity and economic activity result from the publicly funded research work undertaken.

Hugh's centre is successful because it interacts and is driven by industry.

The centres clients and commercials partners read like a "who's who" - the Australian Army, British Aerospace, Comalco, Komatsu, Patricks, UK Ministry of Defence, US Air Force and Navy, Western Mining. In addition, Hugh has been instrumental in 2 successful technology startups. 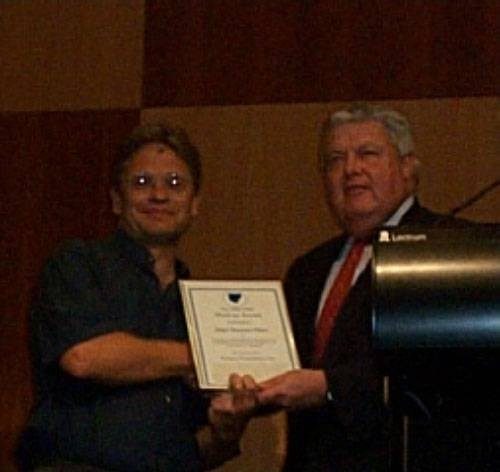