The 2001 NSW Pearcey Award was presented to Derek Renouf, of Adaptive Arts, by NSW Minister for Information Technology, Kim Yeadon, on 12th November 2001.

The state-based Pearcey Award honours a young entrepreneur who emulates Trevor Pearcey's brilliance, levels of achievement and commitment to the profession at the start of their career.

Derek Renouf is founder and chairman of Adaptive Arts, an Australian company that develops productivity tools for software companies in Australia and overseas. He is the principle architect of the Simply Objects modelling tool family and Sofx product framework and has extensive experience as a software developer.

At 31, he has established a strong profile within the industry, presenting conference papers on object technology issues, serving as an industry advisor for a joint committee between NSW and Japanese universities, and serving as Chairman of Software Engineering Australia in NSW.

ACS President John Ridge said the Society was proud to be associated with the Pearcey Foundation and saw its sponsorship of the Pearcey Awards as an important way of both honouring the memory of the ACS' founding Vice President and second President, and of recognising the very significant contributions being made by other IT professionals. 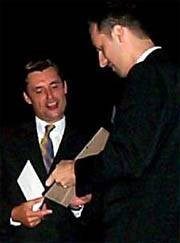