The 2000 NSW Pearcey Award was presented to Clinton Paddison, of JDS Uniphase, by NSW Minister for Information Technology, Kim Yeadon, on 15th November 2000.

The Pearcey Awards commemorate the work of Trevor Pearcey, the Australian builder of the world's fourth, and Australia's first, electronic computer.

Clinton Paddison was educated at Peak Hill Central School, becoming both Captain and 1993 Dux, and went on to Macquarie University, gaining a Bachelor of Technology in Optoelectronics with 1st class honours. He was also awarded the 1997 NSW branch Australian Institute of Physics prize, and the Macquarie Foundation Science Prize.

Joining the company JDS Uniphase as an engineer in 1997, Clinton was swiftly promoted and now manages a department of over 35 staff, with a budget of over $6 million, producing fibre optic components, lasers and transmitters for the telecommunications market.

The winner was nominated and selected by the members of the Award Committee, led by Richard Bridge, as a person who, like Trevor Pearcey, has by hard work, intelligence, and dedication, made a major early contribution to Australia's and the world's IT industry and research.

The Commonwealth Government were Principal Sponsors of the Award this year, with the NSW Government Office of Information Technology having sponsored the NSW Pearcey Award in both 1999 and 2000. 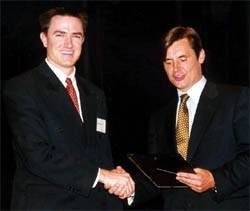