At a special Pearcey Foundation roundtable event, Ben Bromhead and Adam Zegelin were announced as the recipients of the ACT Chief Minister’s Pearcey Entrepreneur Award. Ben and Adam are the technical inspiration behind Instaclustr, a company that helps organisations deliver applications at scale by operating and supporting their data infrastructure through its SaaS platform for open source technologies.

Formed in 2013 as a Canberra-based startup, Instaclustr was initially bootstrapped by co-founders Peter Lilley and Doug Stuart and incubated on campus at the Australian National University (ANU). The company cleverly leveraged open-source to build a fast and scalable data management platform which has become increasingly important to application development companies. Over the last 9 years, Instaclustr raised several rounds of capital and grew to one of Canberra's largest tech firms, employing over 300 people. The company was acquired in May 2022 by US hybrid cloud data services and data management vendor NetApp in a deal that industry sources estimated to be above $500 million.

"Instaclustr provides secure and cost-effective cloud solutions for some of the world's biggest companies using massive amounts of data across their cloud-based solutions. The company's cloud-based, open source offerings help power solutions millions of people use every single day and Instaclustr's solutions are called upon the world over. It's fantastic to see the company truly going global,”

While there were four co-founders of Instaclustr, Ben and Adam were recognised as the technical inspiration behind the company. 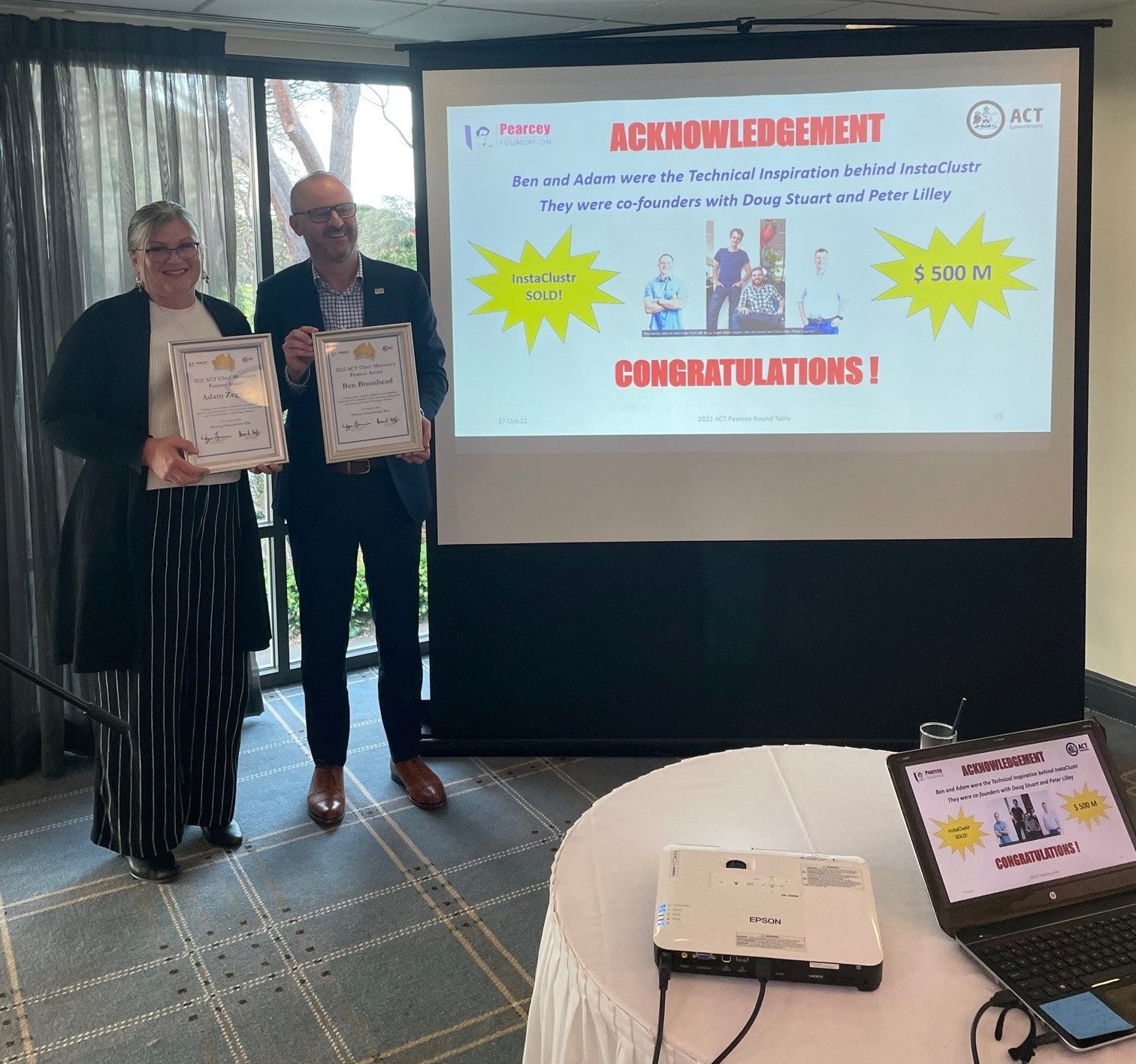 The achievements of Ben and Adam and the success of Instaclustr is a perfect example of how technical innovation, academia and venture capital can come together to deliver more than the sum of its parts.

Following the Award presentation was a special Pearcey Roundtable Event. A panel discussed the topic “Ukraine – the Cyber War”.  The panel discussion was moderated by Alex Cherney, an Australian cybersecurity expert originally from Ukraine.

Ben is Chief Technology Officer and co-founder at Instaclustr, setting the technical direction for the company. Ben is normally located in the California office, however Post-COVID finds him working from Christchurch in New Zealand. Ben is active in the Apache Cassandra community.

Prior to Instaclustr, Ben had been working as an independent consultant developing NoSQL solutions for enterprises and was running a high-tech cryptographic and cybersecurity formal testing laboratory at BAE Systems and Stratsec.

Studying together at ANU, Ben and Adam founded relational.io – somewhat of a precursor to Instaclustr. The initial problem was a need for access to highly scalable databases to help with a project they were working on. After some research, they began using Apache Cassandra and saw its value first-hand for implementing the infrastructure required to support and deliver datasets.

“As we were building tools to help us better operate and manage Cassandra, we began wondering if other businesses out there might be interested in what we’d developed. We then launched an early version of Instaclustr with minimal expectations but had five customers in production soon after – and quickly realised the market demand if we turned our attention there.”

Adam is Technical Fellow and Systems Architect at Instaclustr, which he describes as “a natural progression of sorts” after being interested in computers from an early age. Adam was a casual PC game player but was always more interested in how video games worked, rather than playing them. In high school Adam enrolled at the Academy of Interactive Entertainment (AIE), started by former  Pearcey National Entreprepreneur of the Year Award recipient John De Margheriti.

After earning a Diploma of Computer Games Development from AIE and working as a game developer, Adam took up employment with a local Canberra company and contracted at Geoscience Australia where he worked on its satellite data processing tools and pipeline. It was big data processing with hundreds of gigabytes per day, leading Adam to the view that real world challenges are more interesting than theoretical problems.

As a member of Instaclustr’s engineering team, Adam spends most of his day working on the software powering its hosted Apache Cassandra solution. That includes implementing new features, improving existing ones based on customer feedback, and assisting Instaclustr’s technical operations team in resolving issues.

Adam is also focused on providing Instaclustr's contribution to the broader open source community on which our products and services rely, including Apache Cassandra, Apache Spark and other technologies such as CoreOS and Docker.

The Pearcey Foundation would like to acknowledge the ongoing support of the ACT Government and the Chief Minister Andrew Barr for sponsoring and participating in this prestigious ICT award.