The presentation was made at the 2008 National Pearcey Event evening dinner in Sydney attended by more than 230 ICT professionals. Neville and fellow finalists Dr Neil Weste and Clive Finkelstein were admitted to the 2008 Hall of Fame.

Mr Roach is a distinguished Australian who has made major contributions to the ICT industry, Education and Research as well as developing Australia's multi-cultural society. Born in India, Mr Roach moved to Australia in 1961 and concluded his business career as Chairman of Fujitsu Limited. He was active on numerous State and Federal Government ICT related advisory groups, was an office holder in the Australian Information Industry Association and is a Fellow of the Australian Computer Society.

His work, R&D and education is broad based perhaps best illustrated in his role as founding Chairman of National ICT Australia, the nation's premier ICT research group. His sustained contribution to the development of national policies on social and cultural issues is exemplified through his chairmanship of the Business Migration Advisory Panel. 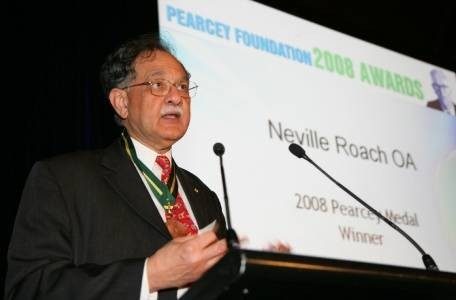