Professor Jennifer Seberry was presented the prestigious Pearcey Medal as part of the 2020 Pearcey National Awards. The Pearcey Medal recognises a distinguished lifetime achievement and contribution to the development and growth of the ICT industry in Australia.

The Medal was presented by Prof Jon Whittle, Director of data61 at CSIRO at the annual Pearcey National Awards held on Wednesday evening, 25th November 2020, via a Zoom call beamed across the nation.

Jenny Seberry, a distinguished academic, commenced her education in Sydney's west, post WWII. She completed her first degree (BSc) at the UNSW in 1966 whilst teaching maths and science at Loreto College (Kirribilli) and North Ryde High School. Jenny then ventured south as a tutor at Melbourne University before doing the same at La Trobe University where she completed her second degree, a Master of Science. Her love and aptitude for Mathematics saw her undertake her PhD in Computational Mathematics also at La Trobe in 1970, by which time she was juggling two sons under the age of 5! Here were the first signs of Jenny drifting back towards computers and software where she began, out of high school, as a programmer at ICL back in 1963-64.

Jenny became the first female Professor in Computer Science in Australia when she was appointed the Head of Computer Science in 1987 at the Australian Defence Force Academy (ADFA). It was while she was at ADFA that her focus on Computer Security emerged and Professor Seberry returned to Sydney University (and UNSW) in 1989, to lead the team which designed the LOKI family of encryption algorithms, which are fundamental building blocks in contemporary global cryptography standards.*

Professor Seberry then assumed the role as Head of Electrical Engineering and Computer Science at University of Nebraska demonstrating her enthusiasm for international experience, collegiality and collaboration; something she has sustained through out her career, regularly convening, chairing and being invited as a keynote speaker to international conferences and committees. This included becoming a Director of the International Association for Cryptologic Research in 1990-92 and the only Australian elected as a Fellow of this association in 2012 for her "outstanding contributions to research and education in cryptologic research and education and for fostering the Australian Research Community".

Professor Seberry joined the University of Wollongong in 1992 where she continued her mathematical research as well as establishing the Centre for Computer Security Research, one of the earliest in Australia. The goal was to 'provide a reservoir of expertise for computer security' which was prescient in view of the importance of cyber security in today's world. This is part of the reason why Professor Seberry is considered 'the mother of Cryptography in Australia'. Many of the notable names in in cryptology in Australia have been her students and proteges at some time, and now hold senior positions throughout the world. She has always been renowned for her generous mentoring.

Jenny Seberry was admitted as an Emeritus Professor of the University of Wollongong in July 2015 for her distinguished contribution to computer security and mathematics in Australia, and dare we say, to the world!

* For those of us unfamiliar with cryptography, LOKI89 and LOKI91 are symmetric-key block ciphers designed as possible replacements for the Data Encryption Standard (DES). LOKI89 was first published in 1990, then named just "LOKI", by Australian cryptographers Lawrie Brown, Josef Pieprzyk, and Jennifer Seberry. More details are available in Wikipedia https://en.wikipedia.org/wiki/LOKI 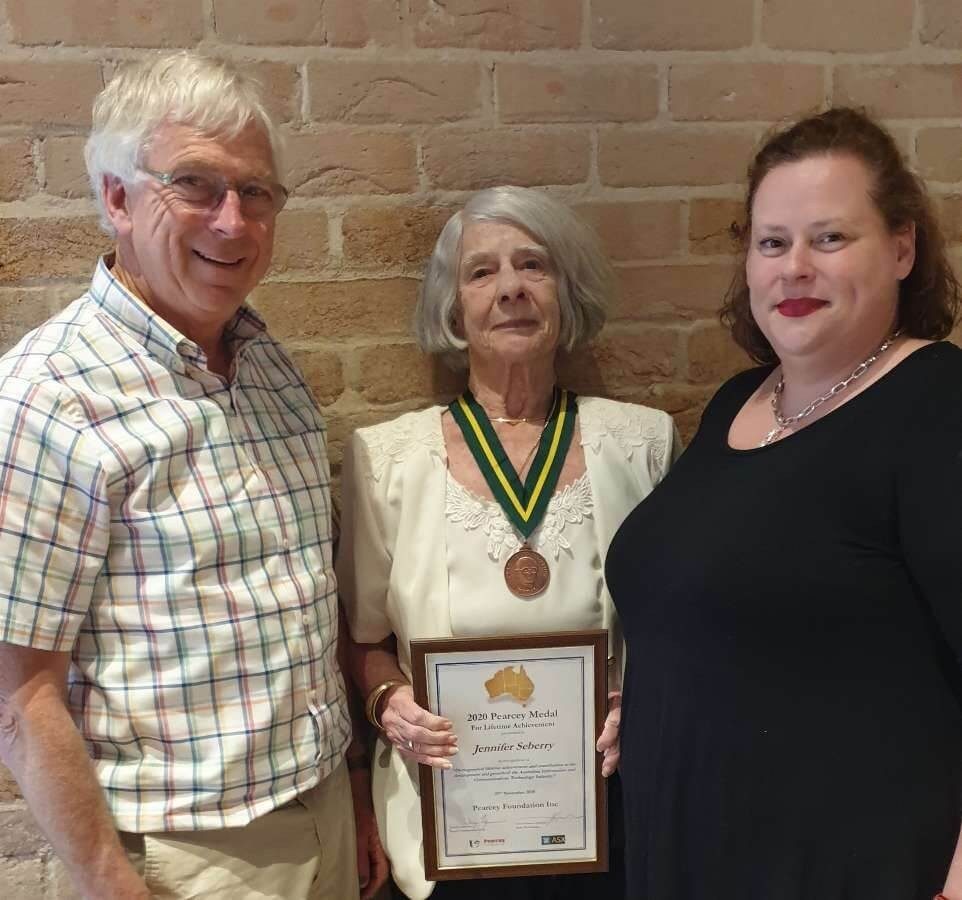