Inducted into the Pearcey Hall of Fame for 2008 was Neville Roach AO, Dr Neil Weste, and Clive Finkelstein.

Pictured right are some of the distinguished guests attending the 2008 Pearcey Medal awards in Sydney held on the 11th September 2008 at the Westin Hotel in Martin Place.

Dr Weste completed his PhD at Adelaide University before spending 18 years in the USA working at Bell Labs, Duke University and University of North Carolina. His pioneering efforts in Very Large Scale Integrated Circuits (VLSIC) are universally acknowledged as is his best selling text on CMOS, still today the definitive undergraduate text in its field, globally. After returning to Australia in 1995 to join Macquarie University, Dr Weste co-founded Radiata Communications with Dr David Skellern to implement a CMOS version of the IEEE 802.11a Wireless LAN standard. The successful trade sale of this start-up hi-tech venture to Cisco Systems in the US, has set the benchmark for the ICT sector in Australia. Dr Weste is active supporting ICT related start-up companies and R&D more broadly through ARC linkage agreements. Professor Weste was also Chairman of the AusIndustry Commercial Ready IT&T committee and IR&D Board, until their recent demise.

Mr Finkelstein is the internationally acknowledged as the Father of Information Engineering following his ground-breaking and revolutionary text entitled "Information Engineering", co-authored with James Martin back in 1981. He and his team coined the phrase "Information Engineering" and introduced the concept at the 1980 IFIPS Conference in Melbourne. Educated at the University of NSW, he graduated in Science and Metallurgy in 1961 before commencing a 15 year career at IBM in Sydney. Clive developed Information Engineering methodologies based on sound and proven engineering disciplines that are now universally accepted throughout out the global software industry. He consulted with many of the world's largest institutions in assisting them prepare for enterprise transformation in which ICT plays a crucial and fundamental role. 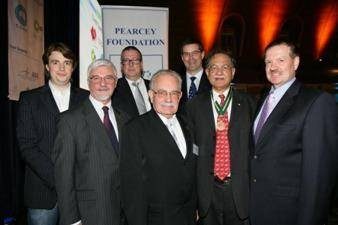