Kevin Robert Elz, often referred to in computing circles as Robert Elz, or simply kre, was a pioneer in connecting Australia to the Internet. Other pioneers of that era include Geoff Huston , Piers Lauder and Bob Kummerfeld all of whom have been appointed to Internet Halls of Fame around the globe. To date Robert Elz has not been similarly acknowledged even in Australia for his true pioneering efforts and foresight.

In the 1980s, prior to the connection of the internet, he played a major role in establishing and managing the email systems which connected Australian research and academic communities to the rest of the world. In 1989 he conducted the first exchange of internet messages between Australia and the rest of the world. He was appointed as the Australian representative on the International Internet Architecture Board, the only Board member outside USA and Europe.

During the development and introduction of internet services, his achievements include developing a number of important Internet standards documents, and participating in developing the internet-based research network within Australia. The international body that allocated global domain space delegated to him the personal responsibility for operating the.au domain registry. This meant that Robert was personally responsible for the allocation of all internet domain names for Australia. Elz was largely responsible for Australia's avoiding a domain name gold rush in the mid-1990s, because he established policies to minimise "cyber squatting." The eligibility policy required a direct connection between a company's official name and its domain name, in contrast to the strictly first-come-first-served policy of the.com registry. Policy makers in other jurisdictions came to recognise how far-sighted these policies were and referred to Elz's procedures as "policy rich". This may have been due in part to the fact that Robert's first degree was in Law.

In undertaking his responsibilities as Internet Postmaster for Australia he worked on a voluntary basis, in addition to his employment at the University of Melbourne. Robert also played the leading role in the 1990s in establishing the internet in the South East Asian region, particularly in Thailand and Papua New Guinea. When, ultimately, the demand for domain names exceeded the capacity of even the most dedicated volunteer, the provision of domain names was commercialised. Robert received scant recognition for his extraordinary contribution he had made in establishing the internet, nationally and internationally. However, Robert has never sought financial reward, nor the limelight.

In addition to his internet activities, Robert developed software for university systems and joint university/industry projects. He was acknowledged within the computer science field as a programmer of extraordinary capability. Industry partners marvelled at his ability to write elegant bug-free software straight to the screen. Robert Elz currently lives, with his wife, in Thailand where he is staff member in the Computer Engineering Department of the Prince of Songkla University. He is also an Honorary Fellow at the University of Melbourne. 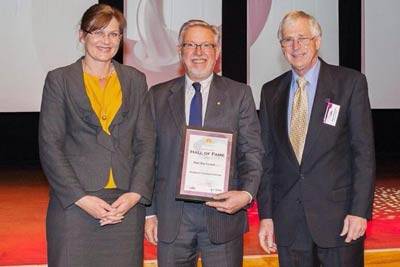 Rod Tucker is a Laureate Professor at The University of Melbourne. He is Director of the Institute for a Broadband-Enabled Society (IBES) and Director of the Centre for Ultra-Broadband Information Networks (CUBIN) in the University's Department of Electrical and Electronic Engineering.

In 1997 he was awarded the Australia Prize for his contributions to telecommunications.

In 2010 Professor Tucker was named one of 100 Most Influential Engineers by Engineers Australia.

Although Rod completed his undergraduate Electrical Engineering (EE) degree and his PhD (also in EE) at the University of Melbourne by 1976, he established an international reputation early in his career. He had extensive industrial experience at HP and Agilent in California and at AT&T Bell Labs in New Jersey. Prior to his experiences in the US he also was a Principal Research Scientist at Plessey UK joining from Cornell University where he was a visiting Fellow.

He has been elected a Fellow of AAS, ATSE, IEEE, IEAust and many other prestigious organisations.

His long term interest in lasers and optical systems for use in telecommunications has well qualified him to perform his current role as Director of the Institute for a Broadband-Enabled Society (IBES) also at the University of Melbourne. IBES is an interdisciplinary research institute that aligns research and industry interests to drive innovation in broadband applications for the benefit of society.

With Rod's strong historical ties to industry, he has led the public debate in dispelling the many myths surrounding the NBN initiative. Rod has been the cool head quantifying the many claims for and against the implementation of high speed broadband in Australia and is applauded for his fearless approach to this challenging role.

Professor Tucker is also working to reduce the energy such networks consume, through this directorship of the University of Melbourne's Centre for Energy-Efficient Telecommunications. His ability to create a collaborative environment between academia and broadband users has been critical in building awareness and capability around the national broadband network program.