Dr Alex Zelinsky AO was awarded the 2013 Pearcey Medal at the annual national iAwards gala event held on Thursday 8th August 2013 in Melbourne. He was appointed Vice-Chancellor at the University of Newcastle, NSW, in November 2018 and was named an Officer in the General Division of the 2017 Queens Birthday Honours List (AO), for "distinguished service to defence science and technology, to systems engineering and to education as an academic and researcher".

Dr. Alexander Zelinsky is a well-known scientist, specialising in robotics and computer vision and is widely recognised as an innovator in human-machine interaction. He has worked as an academic, CEO/Founder of a successful high-tech start-up, as a scientist at CSIRO and Chief Defence Scientist and head of the Defence Science and Technology Organisation until November 2018.

Prior to DSTO, Alex was a senior Executive at CSIRO, where he served as Director of the ICT Centre (2004-09), and Group Executive of Information Sciences (2009-12). Alex co-founded Seeing Machines in June 2000, a company dedicated to the commercialisation of computer vision systems and which is publicly listed on the London Stock Exchange. The technology commercialised by Seeing Machines was developed at the Australian National University where Dr. Zelinsky was Professor and Head of the Department of Systems Engineering (1996-2000). The Seeing Machines products are used globally with extensive application in the area of Driver/operator safety in harsh mine environments.

Prior to joining the Australian National University, Dr. Zelinsky worked as an academic at the University Wollongong (1984-1991) having graduated earlier from this institution with a BSc as well as his PhD. He then worked as a research scientist in the Electrotechnical Laboratory, Japan (1992-1995). Dr. Zelinsky is an active member of the robotics community and has served on the editorial boards of the International Journal of Robotics Research and IEEE Robotics and Automation Magazine, he also founded the Field & Services Robotics conference series.

Dr. Zelinsky's contributions have been recognised by awards in Australia and internationally. These include the Australian Engineering Excellence Awards, US R&D Top 100 Award and Technology Pioneer at the World Economic Forum. He is a Fellow of the IEEE and a Fellow of the Australian Academy of Technological Sciences and Engineering. In his spare time Alex has found time to contribute to the development of the ICT sector as well. For many years he was an iAwards judge and was the inspiration behind the establishment of the Benson Award after the early passing of his friend Tony Benson. He has served on many federal and state advisory panels including the Australian Research Centre (ARC) Centre for Vision Science and the ARC Centre of Excellence for Autonomous Systems. 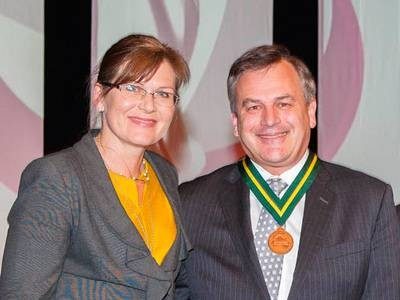