The 1999 Pearcey Medal was presented to Mr Trevor Robinson A.M. by Senator Richard Alston, Minister for Communications, Information Technology and the Arts, before an audience of over 500 senior I.T. industry executives from the Asia-Pacific at the ASOCIO dinner in Parliament House Canberra on November 23rd.

The Pearcey Medal commemorates the work of Trevor Pearcey, the Australian builder of the world's fourth, and Australia's first, electronic computer, which ran its first successful program 50 years ago this month, in November 1949.

Trevor Robinson has had a long and distinguished career of over 40 years in Information Technology, as a researcher with CSIRO, and Defence, as a senior industry executive with Control Data and others, and as an advisor to Government and an industry representative in research and trade development bodies.

"Our winner was nominated and selected by the members of the Medal Committee, after deep consideration, as a person who, like Trevor Pearcey, has by hard work, intelligence, and dedication, made a major lifetime contribution to the development of Australia's, and the world's, IT industry, profession, and research, and gives us a further example of what Australians can and have achieved in the field of information technology."

The State Governments of Victoria and NSW are each the Principal Sponsors for their respective State Pearcey awards. 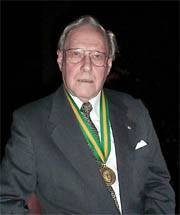