Who came to the first computer conference?

In August 1951, a group of scientists gathered at the University of Sydney to attend the first Australian conference on automatic computing machines. About 200 people came to the conference. The variety of people and their backgrounds gives an idea of who was actually interested in the new field of computing in the 1950s. The demand for mass computation was becoming more relevant and automatic computing machines were the answer.

The 1951 Conference on Automatic Computing Machines was a groundbreaking event that discussed new developments in the technology of digital and analog computing and presented mathematical ideas on programming. It was also the stage to showcase the CSIRO’s work with their Australian-built electronic, general purpose, digital computer with stored-programming, then called CSIR/CSIRO Mark 1,1 and the CSIRO differential analyser. The list of registrations reads like a who’s who of current and future leaders in research in Australia. They were drawn from many different fields including engineers, academics, researchers and mathematicians. There were several professors in attendance. The speakers and many participants made significant contributions in their chosen careers in later years. 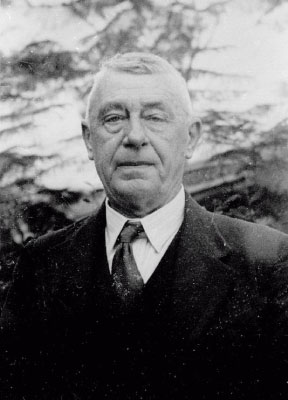 Sir John Percival Vissing Madsen (1879-1969), photograph dated 1946. He was Professor of Electrical Engineering, University of Sydney from 1920-1949 and officially opened the 1951 conference on automatic computing machines.

The conference was an event organised jointly by the CSIRO and the Department of Electrical Engineering, University of Sydney. W.R. Blunden was the Organising Secretary.2 Sir John Madsen, then Emeritus Professor of Electrical Engineering, gave an opening address. Madsen and the attendees knew that this was the start of something new. Most of the papers were given by staff from the CSIRO and the University of Sydney. The CSIRO was very close to the Electrical Engineering Department which was under Professor David Milton Myers.3 Myers had been head of the CSIRO Division of Electrotechnology and the Section of Mathematical Instruments (SMI) before transferring in 1949 to take up the Chair of the department. The SMI, which provided mechanical solutions to computational problems, had also been transferred to within the department to continue its work directly with Myers.After opening papers from the international guest speaker from the University of Cambridge, Prof Douglas Hartree, the remaining papers were about Australian research. Trevor Pearcey and Maston Beard presented their work on the CSIRO’s newly completed electronic digital computer with stored programming. Pearcey had a long career in computing with the CSIRO and later held academic positions with the Caulfield Institute of Technology/Chisholm Institute of Technology now Caulfield campus of Monash University. He retired as Foundation Dean of Faculty of Technology, Chisholm IT in 1984. Maston Beard worked with the CSIRO for his remaining career and retired as Assistant Chief at the Division of Computing Research in 1980.4 David Myers presented papers individually and a joint paper with W.R. (Ross) Blunden on their project to build a differential analyser. He also had a shared paper with presentations on work undertaken by his students. Myers had a distinguished academic career and was Professor of Electrical Engineering, Sydney University, (1949-59), then Dean of Applied Science, University of British Columbia, (1960-65) and then Vice-Chancellor of La Trobe University, (1965-76). Ross Blunden later moved to be the Foundation Professor of Traffic Engineering, University of New South Wales. A final paper from the University of Adelaide highlighted work by Gordon Rose and W. G. Forte under Professor Willoughby. Professor Willoughby was foundation professor of Electrical Engineering at the University of Adelaide, South Australia. Gordon Rose went on to be Foundation Professor of Computing Science at the University of Queensland after he participated in the development of the computer project Cirrus. Forte was on staff at the South Australian Institute of Technology.

The official Proceedings, printed a year later, helpfully gave a list of most of the attendees. The names are given alphabetically with the accepted format at the time showing surname and academic titles if appropriate with men’s first names given by initials but entries for women were differentiated by also showing their marital status. (In this case, all 16 of the women who attended were designated “‘Miss”.) The names were followed by their institution affiliation. So, who came to the conference? There was a mixture of research and academic staff and a large group of post-graduate students. The participants reflected a large variety of studies but all were interested in new mechanical computation developments and possible applications for research. The largest number of attendees came from the CSIRO which sent 55 people drawn from 12 Divisions. The University of Sydney had 32 representatives. Seven of the CSIRO people were from the SMI within the Electrical Engineering Department.

There were 15 staff members from Radiophysics at the 1951 conference – 9 men and 6 women. This general staff photo taken a year later, includes some of those that attended.

Other participants who were to take up a career in computing included Brian Swire who became Chief Engineer on the computer SILLIAC at the Basser Computing Department of the School of Physics in the mid- 1950s but was still at the Aeronautical Research Laboratory Melbourne in 1951.8

Significantly, the Snowy Mountains Hydro-electric Authority sent 12 staff members. They were exploring their options for undertaking the extensive calculations required for the engineering projects then in planning. They were later to work with the University of Sydney on new computing projects including SNOCOM. Various government departments, both NSW and federal, had staff attend the conference. A different group of attendees came from commercial office equipment suppliers with 25 men from companies including IBM, British Tabulating Machines Ltd (later incorporated into ICT then ICL) and NCR.

The list of attendees reveals that there were 16 women at the conference; 13 of them were employed by the CSIRO and about half of them worked at the Division of Radiophysics. The Division had a mathematical computation group led by Trevor Pearcey which employed human computers, mainly women. They completed manual calculations and also assisted with work on the punched card equipment. In government employment classification terms, most of them were employed as ‘assistants’ although some had university qualifications and were attending classes. Margaret Adamson was the lone female professional staff member in the mathematical group by this date. (There were other professional female staff in the mathematical group in the late 1940s.) Another CSIRO female professional staff member present was Helen Newton Turner who was then in the Section of Mathematical Statistics. She became senior principal research scientist of CSIRO’s Division of Animal Genetics in 1956. She supervised the McMaster Laboratories in the Division, and Pearcey transferred his punched card machinery, discussed in one of his papers for the conference, to her control at this laboratory in 1954.9

As well as Dr J.L. Pawsey from the CSIRO Division of Radiophysics, there were four government and private astronomers at the conference including Dr S.C.B. Gascoigne and H.J.M. Abraham from the Mt Stromlo Observatory, Harley Wood from the NSW Observatory and Father O’Connell who came from a private observatory called Riverview in North Sydney. Dr Gascoigne (1915-2010) was Principal Scientific Officer at the Commonwealth Observatory from 1951 – 1961, and a Reader at the Australian National University in Canberra. He was a Professor at the Australian National University until his retirement in 1980.10 The NSW Astronomer Harley Wood (1911-1984) was a graduate in physics and mathematics from the University of Sydney and gained a Doctor of Science in 1965 for his work on astrometry. He became NSW Government Astronomer in 1943. He spent considerable time on completing the Australian contribution for the Astrographic Catalogue which started locally in the 1890s using female computers.11 Father O’Connell was a Jesuit priest, teacher and an astronomer attached to the Riverview Observatory at the school St. Ignatius College near Lane Cove. Several months after the conference he was appointed Papal Astronomer in 1952 and went to spend the remainder of his career in Rome. The introduction of mechanical computation would prove a major asset to the science of astronomy.

Staff from the Long-Range Weapons Establishment (LRWE) came to discuss their increasing computing requirements. The rocket project in South Australia with tests at Woomera required copious amounts of computation which was handled by a large team of female computers. Mary Whitehead was in charge of this group and was one of the 5 LWRE staff sent to Sydney for the conference. The LWRE (later Weapons Research Establishment) realised that manual calculations were not efficient. The LWRE was initially interested in building a version of CSIR Mark 1 but this proved too difficult. The staff organised their own conference in 1957 after the installation of the computer WREDAC (WRE Digital Automatic Computer)in South Australia.

It must have been a curious mix of people at the conference. There was a great range of age and background with post-graduate students in their early twenties, researchers and several venerable professors as well as commercial representatives. But they were all there to learn about the new study of information processing that would open up new technologies and research opportunities.

1 The Australian Government research body Council for Scientific and Industrial Research (CSIR) dates 1926-1949 and replaced earlier bodies. CSIR was reorganised as the Commonwealth Scientific and Industrial Research Organisation (CSIRO) in 1949 onwards. The computing work at the Division of Radiophysics uses the prefix CSIR and later CSIRO with the digital electronic computer designated Mark 1. It later became called CSIRAC when transferred to Melbourne in 1955.2 W.R.(Ross) Blunden (1916-2003) was a Senior Research Officer, CSIRO Section of Mathematical Instruments (SMI) from 1947-1952; SMI was located in the Electrical Engineering Dept., University of Sydney. He later moved to become the Foundation Professor of Traffic Engineering, University of New South Wales from 1956-1981.

3 David Milton Myers (1911-1999) was made Head of Electrotechnology, National Standards Laboratory from 1938-1949 and also Chief of the CSIR Division of Electrotechnology from 1945-1949. The Section of Mathematical Instruments (SMI) was created within the CSIR Division of Electrotechnology in 1948. David Myers was offered position of PN Russell chair of Electrical Engineering, University of Sydney in late 1948 and SMI moved with him into the University department. SMI provided mechanical solutions to computational problems. Myers had a long academic career – Professor of Electrical Engineering, Sydney University, 1949-59. Dean of Applied Science, University of British Columbia, 1960-65. Vice-Chancellor of La Trobe University, 1965-76. See his account of the 1951 conference in Bennett et al Computing in Australia: the development of a profession. Hale & Ironmonger, Sydney 1994.

6 Ward, C. 2011 Douglas Geoffrey Lampard (1927-1994) https://csiropedia.csiro.au/lampard-douglas-geoffrey/ see also Brown, B.2012 A Brief History of the Department of Electrical and Computer Systems Engineering at Monash University 1962-2012. Monash University pp7-8 Note Lampard was Fellow of the Australian Academy of Science in 1977. He also was elected as a Fellow of the IEE, the IEEE, the IREE, IEAust and the AIP. https://www.monash.edu/__data/assets/pdf_file/0005/710978/history-of-ee.pdf

There were 15 staff members from Radiophysics at the 1951 conference – 9 men and 6 women. This general staff photo taken a year later, includes some of those that attended. Title: CSIRO Radiophysics General Staff 1952 Source: Museums Victoria MM 90899.122. https://collections.museumsvictoria.com.au/items/1686280 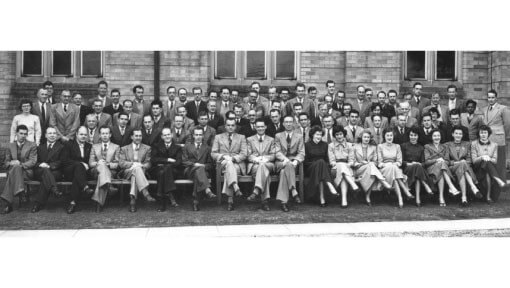