Book Review – A Thread Across The Ocean: The Heroic Story of the Transatlantic Cable. By John Steele Gordon

A gripping, masterly telling of a vastly important, but oft forgotten part of our technological history. This is a story of a monumental technological and engineering feat that set the stage for international infrastructure and communications, yet today many do not even think how or why it happened.

This is not a book of dry facts. It’s a tale woven to reveal the people, their lives and fundamental natures, in an age when entrepreneurial spirit and corporations were admired. It follows the ups and downs of fund raising, the hype and limitations of technology for making and laying undersea cables including the ships to lay it, and the technologies developed in the late 1800’s that lay the groundwork for today’s world.

Anyone who has been involved in large scale projects will feel an eerie sense of familiarity reading this book. As a project of immense scale spanning 11 years (1855 to 1866) and taking five attempts to succeed, it is an insight into project planning and implementation, highlighting managing project failures and navigating associated politics. You learn about improved professionalism of subsequent approaches as a result of taking on board lessons learned. Even the impact of time on projects and how technology improves substantially from project commencement to the end, and the necessary modifications required, is a strong message in this book. The problems caused by the combination of incompetence and authority may also resonate!

Whilst not highly technical the book does cover the issues of laying a submarine cable, the trial and error of working out the appropriate insulation material, the proper thickness and weight for the cable, and the degree of purity of copper wire required. Cross sectional diagrams are included so the reader can gain an insight into the layers that make up the cable.

The book includes a vivid retelling of a devastating storm that lasted a week and nearly capsized the smaller of the cable laying ships. As well as heart breaking attempts to recover cable that had snapped and was resting on the ocean floor. The scale of the risk and hardship is startling to modern eyes.

Woven into the story are intriguing historical characters who either provided financial, scientific or engineering support for the endeavour. Some key characters of note are Samuel Morse (telegraphic code) and Lord Kelvin (electrical currents). Some of these side stories may be considered tangents however they positively contribute to the historical understanding.

But most of all this is a tale of the power of individual vision combined with intelligence, innovation, determination, drive and money. The unstoppable grit and resilience of the lead character Cyrus Field, who invested hundreds of thousands of his own money and never lost sight of his goal and never gave up, is highly admirable. Cyrus Field with the right team(s) changed the world forever with this remarkable accomplishment.

Like many new technologies its birth was fraught with difficulty and began at prices only the very wealthy could afford. Yet within a generation, submarine telegraphy opened up the world to instant communication. Then the subsequent generations of telephone traffic and data communications lead to today’s optical fibres for digital, telephone and internet connections around the world.

This is a story of an era where entrepreneurs, scientists and financiers were admired as heroes… and their courage and achievements were truly heroic. 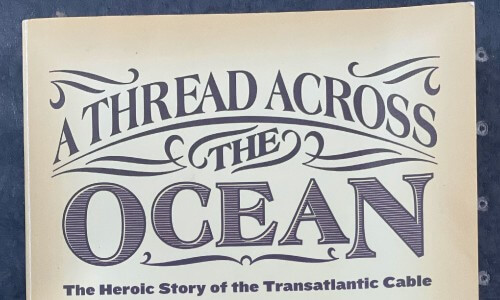