The Rise And Fall Of Semiconductor Manufacturing In Australia

Following the invention and development of the transistor in the late1940’s in the USA, the CSIRO began research into semiconductors. The work was led by Dr. Louis Davies and was based on technology transferred from Bell Laboratories in the USA. At CSIRO they refined and purified germanium for single crystal production, made transistors and developed applications for them. This work commenced in 1953 at Rydalmere in NSW and continued until 1958, when the plant was transferred to AWA.
In the aftermath of WWII the radio manufacturing industry in Australia was accustomed to operating in an atmosphere of self-sufficiency and procuring its components from local manufacturers. Resistors, capacitors, transformers, loudspeakers, coils and vacuum tubes were manufactured by a number of Australian companies including, AWA, Philips, STC and Ducon.

THE GERMANIUM ERA IN AUSTRALIA

The first entrant into the field was Standard Telephones and Cables (STC) who in 1958 began transistor production at its Alexandria NSW factory making a range of germanium audio frequency transistors.
AWA had committed to manufacturing transistors, under license to RCA, at its Rydalmere plant by 1957. It began assembling 2N109 transistors from imported components. In 1958 its new plant was opened. Germanium crystals were imported, sliced into wafers and broken down into individual pellets which were then assembled and fused in a conveyor furnace.
Philips began manufacture of germanium transistors and diodes in 1959 at Hendon in South Australia.
Ducon, well known as a supplier of capacitors, also began manufacture of transistors in Sydney, under license to CSF in France, and silicon rectifiers under license to Mallory in the USA. By 1960 they offered a good range of Germanium transistors and diodes
manufactured locally.
Anodeon Pty. Ltd., which had been established in Victoria to make electronic components for the extensive manufacturing operations of Electronic Industries (EIL), also began about this time with a line of germanium transistors and diodes.
The processes used varied from manufacturer to manufacturer but, in general, they were not able to produce the fast and reliable devices which characterised the silicon era.
The market was dominated at this time by the needs of the manufacturers of consumer radios.

THE SILICON ERA IN AUSTRALIA

In January 1960, Fairchild Semiconductor launched the silicon planar transistor technology into the market with the release of the 2N1613 device. This technology was rapidly adopted by most other transistor manufacturers and became the standard structure for modern semiconductor devices (being based in Sunnyvale, California, they also were responsible for the coining of the term ‘Silicon Valley’). The planar process was also an important technology for the commercial development of Integrated Circuits (ICs), which appeared on the market shortly afterwards.

Initially in Australia the biggest users or transistors and diodes were the manufacturers of consumer radios. Later as silicon planar technology advanced transistors began appearing in television receivers.

Beginning in 1965, from a purpose-built factory in Croydon in Victoria, Fairchild manufactured a range of transistors and diodes specifically designed for this consumer market. Transistors were manufactured in large quantities in a variety of packages. A low-cost epoxy package was favoured for consumer markets and diodes in low cost glass package. Transistors were also manufactured in metal TO-18 and TO-5 packages suitable for a wide range of applications. Later Integrated Circuits (ICs) were made in a ceramic Dual-in Line (DIP) package. The manufacture of power transistors in TO-66 and TO-3 was begun some years later and by 1973 Fairchild was making small signal transistors in a plastic moulded TO-92 package.

The manufacturing process at Fairchild Australia’s factory began with a wafer of silicon on which the transistors or ICs had been diffused. The individual devices on the wafer were probed and given a basic functional test. Devices not passing the test were marked and then the wafer was scribed with with a diamond before being broken up into individual dice.

At the Philips factory in Hendon in South Australia a wide range of electronic components were manufactured including ferrites and wound components. The manufacture of a full range of semiconductors had begun with germanium transistors and continued on to silicon transistors. Silicon wafers were diffused. Integrated Circuit production began in 1970.

AWA offered a wide range of devices from their factory in Rydalmere and moved into the diffusion of silicon semiconductors Anodeon Pty. Ltd. continued semiconductor manufacture on into the silicon era, but the facility was taken over by Philips in 1970 and subsequently closed.

National Semiconductor opened a factory in Bayswater, Victoria and began the manufacture of silicon transistors about 1973.

Most electronic components, particularly transistors, relied on labour intensive processes and there was a very large work force engaged in the manufacture of electronic component in factories spread around Australia. Substantial tariffs protected electronic components from imports sourced from low labour cost countries.
In the lead-up to the introduction of colour TV in Australia, the manufacturers of TV complained of the high cost of the components required for their receivers.
In July 1973 the Australian government, concerned about the cost of colour television receivers, dropped tariffs on imported electronic components by 25% across the board. There were no transition arrangements provided. A further substantial cut in tariffs was made just after Christmas in 1973.
The consequence of these abrupt reductions in tariff protection were that the factories making semiconductors and other electronic components became quite unprofitable. Many closed down almost immediately and from that time most electronic components, including semiconductors, were imported.
Some high technology processes were still competitive. The thick film hybrid semiconductor product line, which had started recently at Fairchild Australia, was spun off into Hybrid Electronics Australia and has operated successfully ever since.
The silicon wafer diffusion facility at the Philips Hendon plant, continued on a research basis. Likewise, the wafer diffusion facility at AWA continued at AWV Microelectronics with a strong links to the University of NSW.

The author, Bernie O’Shannassy, holds a Masters Degree in Electrical and Electronics Engineering from the University of Melbourne. Bernie worked for Fairchild Australia Pty. Ltd from 1965 to 1974 starting as an Applications Engineer and became Manufacturing Manager of its semiconductor factory in Croydon, Victoria, Australia. This article was prepared from memories of that time and the above sources. 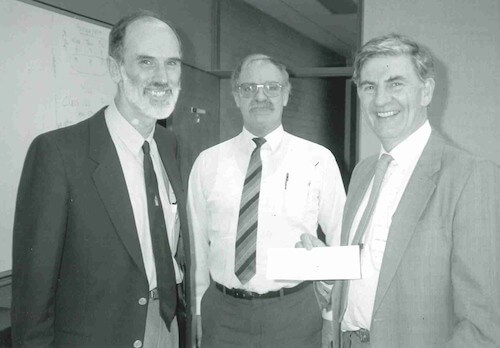