The 2019 Victorian Pearcey Entrepreneur Award was presented to Craig McDonald, founder and CEO of MailGuard and BlackEvents. The award, in its 20th year, was presented by the international thought-leader Roger Taylor, Chair of the UK Centre for Data Ethics and Innovation, who also gave this year's Pearcey Oration at the dinner.

MailGuard was founded in Melbourne by Craig in 2001, and is now the largest privately owned cloud email and web security provider in the world. The company operates in over 27 countries, has more than 500 channel partners worldwide, offers 100% guaranteed availability and maintains a quintessential focus on serving its customers and their users. That focus delivers a remarkable customer retention rate of 98%. MailGuard is integrated with all the major email platforms, and is the preferred supplier and partner for some of the world's largest companies, including Microsoft.

"Craig has built a globally leading cyber security business from the ground up, which is particularly impressive because he is not a technically trained professional. He is absolutely committed to the vision of technology delivering to us a better world. MailGuard AI-powered cloud cyber security solutions help to protect us from the ever-present and ever-evolving threats to our users and our enterprises. He runs his business with a focus on his people and operates an impressive internship program, helping to build a stronger base for the future of the ICT ecosystem in Australia," said Jordan Green, Victorian Chair, Pearcey Foundation.

After an email-borne virus caused havoc for his company, Craig realised how vulnerable businesses are to cyber threats and it inspired him to start MailGuard. MailGuard leads the way in cloud email security, providing protection, continuity and archiving in a single, integrated cloud solution. In 2016, MailGuard was the only cybersecurity vendor invited by Microsoft to join the pilot of its CSP marketplace, along with a handful of other leading Microsoft partners.

Today, MailGuard has over 500 partners globally, and protects thousands of businesses around the world. Craig's latest initiative, MailGuard 365, takes an evolutionary approach to email security. Built and designed by MailGuard with the team at Microsoft to protect their 200 million Office 365 users around the world, it is exclusive to the Microsoft marketplace. A world first, it works natively with Office 365, with one click activation via the clients Microsoft's tenant, allowing unique evidence-based reporting demonstrating its stopping power over and above Office 365. It is the last email security check before a criminal intent email could literally mean lights out for a business.

Craig's focus is to protect the state of the nation, by supporting and educating businesses who continue to struggle with email security. Recently Craig authored Surviving the Rise of Cybercrime, a non-technical executive guide, to enable business leaders to be more proactive tackling the threats posed by cybercrime. Craig believes MailGuard's constantly evolving, leading-edge technology has the potential to secure the future of the digital economy.

"Craig epitomises the values of the Pearcey Foundation. He took a risk to start his companies, to change the world for the better and to do it all from a base in Melbourne, long before we even had the concept of a tech startup," said Wayne Fitzsimmons, Chair, Pearcey Foundation. 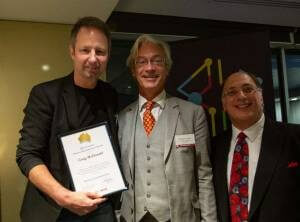