The 2018 Victorian Pearcey Entrepreneur Award was presented to Bernie Tschirren and Michael Cameron on Tuesday 28th August at the Monash Chambers, Melbourne. The award was presented by Dr Amanda Caples, Chief Scientist, Victoria as part of a special Pearcey Day(PDF, 107 KB).

Bernie and Michael met in 2007 developing software at Microsoft in Seattle. They became friends and shared a range of frustrating travel experiences with maps, printed timetables and relatively poor information about planning travel routes. Being both technical, with search engine experience, they could see the opportunity to bring the travel transport experience into the 21st century.

Instead of juggling timetables, maps, fare schedules and guide books, they wanted to put the whole planning exercise online and to cover all modes of transport and be as effortless as possible. Thus was born Rome2Rio, the world's best and biggest multi-modal travel planning and booking service. Just enter any two places in the world and in less than a second you will have a variety of travel itinerary options to connect you door-to-door.

Today the Rome2Rio site attracts over 600,000 visitors a day which is nearly 13 million unique visitors a month, making it one of the top travel planning sites in the world. The site supports around a million routes from 5,000 transit operators giving access to most countries in the world. The company has been winning prestigious international travel industry awards since 2012.

In 2010 Michael and Bernie moved back home to Australia and committed to building a global technology business from a base in Melbourne - starting in a parents' lounge room! Their passion and commitment have underpinned their success and inspired many others to follow their example. Rome2Rio grew in the Inspire9 co-working space where the affable natures of these men had them collaborating and sharing their experiences with the many founders at Inspire9. Last December they outgrew the co-working space and moved their 40+ people to a new global headquarters, in the same converted warehouse complex that houses Inspire9 and Melbourne-born global success story, 99Designs. There are a further 30 team members spread around the world in their global content team, all anchored to the Melbourne hub.

Both founders had carefully considered views on how they wanted to grow their venture and those included taking Australian investors on-board, attracting great Australian advisers, making sure it was a fun team to be in and always pursuing technical excellence.

Michael has a PhD in Mathematics from RMIT and was a lead software engineer in the Bing Search team for Microsoft so, it is no surprise that he drove the Rome2Rio excellence in search. He also took on the business leadership role.

Bernie is a Computer Scientist from Curtin University who was a senior software engineer with PalmTEQ before moving to Microsoft as a Senior Developer. At Rome2Rio Bernie has focused his efforts on the technology infrastructure and driving strategic development projects. He prefers being hands-on and elbows deep in the technology.

Together Michael and Bernie have worked hard to ensure that Rome2Rio is a welcoming, supportive and diverse community where people can shape their own futures.

The Pearcey Entrepreneur award recognises outstanding individuals for who they are and how they have lived their lives to make a difference to others. Bernie and Michael epitomise the values of the Pearcey Award. They took a risk to start a company to change the world, then decided to go further and base themselves in Melbourne at a time when the startup ecosystem was still getting going. As individuals they have contributed to the positive difference their venture has made to the lives of its people, in the lives of its users and to the value for its investors. They have had the bravery and good sense to do things in a way that works for them, rather than following some default model. This individuality and strength of character has inspired those who have the privilege of sharing the experience with them.

As they enter a new phase of growth and success for their venture Bernie and Michael continue to make the tough decisions for the right reasons. In doing so they continue to take a risk for the purpose of making a difference and inspiring others to live better lives.

At the presentation Bernie Tschirren accepted the award on behalf of himself and Michael. 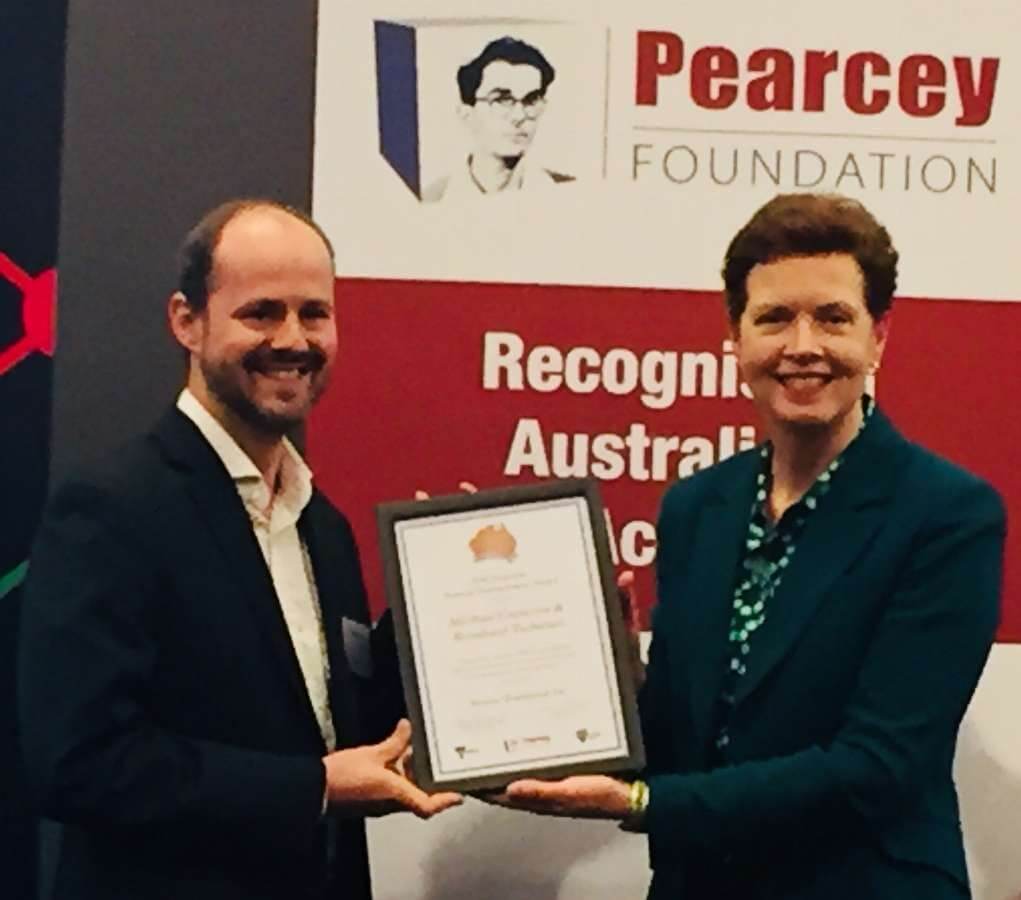