Alec was recognized as an outstanding practitioner who has tackled fundamental problems in communications, developed the hardware and software necessary to solve those problems and then taken the risks necessary to get those solutions onto the world market.

Alec's P3 product was deployed in East Timor to assist the peace keeping and rebuilding effort there and has also been used by the Australian Defence Forces in Bougainville and Afghanistan.

The Chair of the Victorian Awards Committee Peter Thorne said:

"Alec is an inspiration to young people making a career in ICT. He has contributed to both the industry and broader community and has shown that Australian companies can be up there with the world's best. The Pearcey Foundation is pleased to give this award to Alec and we feel sure he will continue to be a role model to young entrepreneurs."

The 2003 Victorian Pearcey Award presentation was hosted by the Victorian branch of the Australian Computer Society during its annual conference dinner at Lorne, Victoria where conference delegates were on hand to congratulate their colleague, Alec Umansky on his outstanding achievements.

Ladies and Gentlemen, good evening to you all.

I am thrilled to be presented with this award tonight and I would like to thank the Pearcey Foundation for making this unanimous selection and to Parliamentary Secretary, Liz Beattie for presenting it on behalf of the Victorian Government. It is wonderful to be acknowledged for ones efforts and to be acknowledged by ones peers is perhaps the biggest compliment of all. Tonight so many of you made me feel this and I am very grateful.

Of course there is no such thing as a single-handed effort. Behind every winner there are people who help along the way and I would like to acknowledge some of these people. I notice a number of Government representatives here tonight and I would like to start by acknowledging the Department of Industry and Resources and their COMET (Commercialising Emerging Technologies) Grant which aided me in getting where I am today. In particular I would like to thank VECCI and my COMET adviser, Business Angel, Mr Bob Beaumont whose guidance and advice has been invaluable over the last year or so. Thank you, Bob.

Most of all I would like to acknowledge some great people from the Australian Army who first made me aware of the need for this type of product and who encouraged and supported me - I might add that none of this support was financial. It has been a privilege and honour to work with these people and it would be entirely remiss of me not to acknowledge them on this occasion. The government has really been a foundation of my success.

So what is it that I have done? Well, basically, I am an engineer and I have designed a box. A specialised communications box that provided voice and broadband multimedia links in areas where no infrastructure may exist. Areas that may have been struck by hurricanes, floods or fires, in disaster recovery situations and even in remote communities of Australia and beyond.

Rick Harvey made mention of a spectacular international success. I must correct that. We do not dominate the world just yet! However, we did receive our first export contract from Canada and are poised for growth.

I would take this opportunity to thank my wife Dinah for providing me with support along this road and for willingness to help to spend the award money! Thanks Dinah.

And finally I would take this opportunity to thank the Australian Computer Society. I was overwhelmed today with the amount of good wishes today from people who do not even know me. It is quite a humbling experience. Thanks to you all for your best wishes. I understand that a membership to the ACS is a part of this award. I don't exactly know what that is but judging from tonight I think I will be in excellent company. 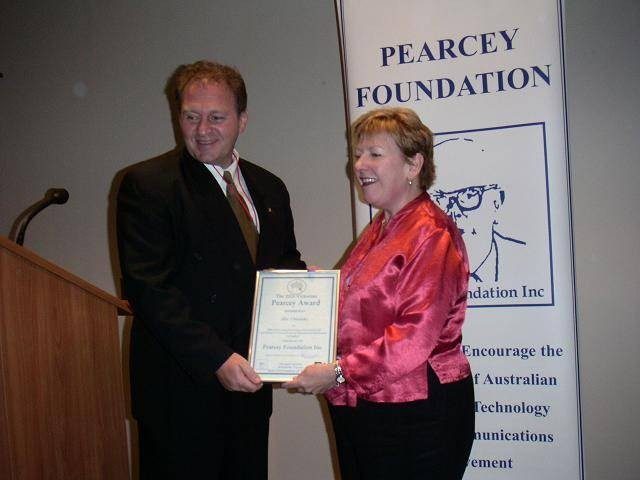