The 2000 Victorian Pearcey Award was presented to Rick Harvey at the Australian Computer Society Conference at Lorne on 27th March 2000.

Mr Bruce Mildenhall, Parliamentary Secretary to the Premier of Victoria and Member for Footscray, presented the award on behalf of the Minister for State and Regional Development. He summarised Rick's career of 15 years developing software products for the world market and concluded,

"In 1997, our winner was part of a management buyout of the directory business, named OpenDirectory Pty Ltd. This was later acquired by US company Platinum, which in turn was acquired by Computer Associates International, where our winner continues to work, with the fabulous title of Asst. VP Research and Development, leading a research team of 25, and involved in major international projects flowing from his original pioneering work."

Rick, on receiving her Award, thanked the Government of Victoria and the Australian Computer Society as major sponsors, and the Pearcey Foundation for the honour. He also gave credit to the OpenDirectory team and investors and gave a brief indication of what is was like to take Australian software global. This included a brief description of a David and Goliath contest with the heavy-weights of the industry, such as Netscape, and how one of the largest Banks in the world, Bank of America, came to choose the all Australian built and owned software for their next generation customer systems.

Mitchell Shaw has developed a range of Virtual Reality hardware components, including an online simulator for VicRoads that illustrates the dangers of speeding. His company, Realism Multimedia Pty Ltd, has recently become the Asia-Pacific Development partner for German company Blaxxun Intercative, a major producer of 3D software. He received the inaugural Victoria Fellowship from DSD.

Dr Kate Smith completed her doctorate on the topic of neural networks. She is a Senior Lecturer in the School of Business Systems at Monash University, and has received international recognition for her work, which applies these techniques to the solution of complex optimisation problems. These include optimising sorting centres for Australia Post, and assembly line sequencing for GMH. She is now applying these concepts to data mining, to enable analysis of large amounts of data and identifying patterns within that data. She has written one of the few books on this subject "Introduction to Neural Networks and Data Mining for Business Applications". 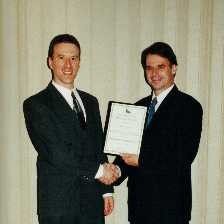