The co-founder of Brisbane company Sundata and chairman of Software Queensland, Kon Kakanis, has been named recipient of the 2005 Queensland Pearcey State Award.

The award, which recognises outstanding and early achievement by an information and communications (ICT) technology professional, is part of a nationwide move by the Pearcey Foundation to acknowledge and encourage the contribution of Australians to the nation's high-tech landscape.

The State winner was announced in Brisbane today (Tuesday 29 November 2005) by the Honourable Chris Cummins, Minister for Small Business, IT Policy and Multicultural Affairs.

Judges said 44-year-old Mr Kakanis, the chief executive officer of software company Sundata, had made a contribution above and beyond the demands of his personal business interests, taking a strong leadership role in the local computer industry.

Kon Kakanis is co-founder of Brisbane company Sundata and chairman of Software Queensland.

A graduate of the University of Queensland with a BSc in Mathematics, he was just 25 when he founded IT solutions company Sundata with partners John Hutson and Matthew Parker. Sundata now has a staff of 22 and clients in the corporate and government sectors. Its QUAD application for schools is sold and supported across Australia.

As chairman of Software Queensland, Kon Kakanis has worked towards forging a harmonious and productive relationship between the IT industry and government and ensuring that the issues of procurement and industry development are more closely linked.

Judges said the powerful line up of final contenders for the State award served to demonstrate the strength and potential of the ICT sector in Queensland.

The Pearcey Foundation was established in 1999 to recognise excellence in information technology and telecommunications and raise awareness in the wider community of the significant contribution to national development made by Australians working in these fields.

Its inspiration was Trevor Pearcey, an English academic who migrated to Australia after the Second World War and led the pioneering team of CSIR engineers and mathematicians who designed, built and operated Australia's first digital computer - CSIRAC - also the world's fourth such machine.

The Foundation's premier annual award is the National Medal. As well, each year one or more leading professionals are honoured with admission to the Pearcey Hall of Fame and separate State awards made to acknowledge the achievements and selfless contribution of younger professionals.

"They were years ahead of their time in creating something that was state-of-the-art and world leading," he said.

"The CSIR team put Australia on the map in the modern ICT world." But unfortunately, Mr Fitzsimmons said, the significance of their efforts was little appreciated and those who followed had suffered a similar lack of recognition. The Pearcey Foundation's intention was to rectify this.

"Pearcey medallists should be household names, like film stars and sportsmen and women," he said.

He warned of an alarming trend, saying that since the 2001 Net bubble burst the number of ICT graduates in Australia has been shrinking. Now with demand for computer professionals again on the rise the shortfall must be speedily addressed or the nation would suffer.

This year's National Pearcey medallist, announced at the annual award ceremony in Melbourne in October, was Professor John O'Callaghan, executive director of the Australian Partnership for Advanced Computing (APAC). Professor Ashley Goldsworthy was admitted to the Pearcey Hall of Fame at the same ceremony.

Sponsors for the 2005 Queensland Pearcey Awards 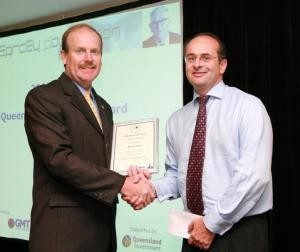