On Thursday evening 1st November 2007, Roger Allen AM was presented the 2007 Pearcey Medal by Senator the Honorable Helen Coonan, Minister for Information and Communications Technology and the Arts at the annual Pearcey Foundation Awards evening in Brisbane attended by more than 130 ICT professionals. Fellow finalists Dr Rob Newman and John Puttick were admitted to the Pearcey Hall of Fame.

Roger's award recognises 30+ years of commitment to the ICT industry. He has been a successful entrepreneur in his own right as well demonstrating a long term commitment to assisting the development of the industry.

Roger Allen's commitment has been through long term involvement with ICT industry associations, advising federal and State Governments as well as being active in several philanthropic and not-for-profit sector enterprises including those for indigenous Australians.

Roger Allen is a well known identity in the ICT industry and is currently chairman of Allen & Buckeridge (A&B) since he and his partner Roger Buckeridge founded the company in 1996. A&B is an Australian venture capital firm specialising in early and expansion-stage investments in the information technology, telecommunications and digital media industry. Some of the better known start-ups he has assisted include Hitwise, Wedgetail, BlueGum, Authentic8 and Seek. Roger serves as a Director of several A&B portfolio companies and has extensive experience in commercializing and globalizing R&D and innovative ideas by nurturing and expanding these businesses and entering the international markets.

In early 1990s, Roger was the chief executive and a major shareholder in the Computer Power Group Limited, one of the largest independent IT&T companies originated in Australia and operated globally. Under the guidance of Roger, the company grew to over $300 million in annual revenue and from a 6 person staff to more than 3,000 personnel. Roger relocated to the US and led Computer Power's US business, which was later sold in 1995 to Interim Technology, a large US computer services company.

In 1987 he won the Information Industry Achiever of the Year Award. Roger was the first chair of the Australian Information Industry Association from an Australian company. He was elected a Fellow of the Australian Computer Society and Vice-President of the Asia Pacific Information Industry Organisation. He has served on two Prime Ministers' Science and Technology Councils, and both Victorian and New South Wales Government Advisory Boards. He was appointed in 1990 as Deputy Chairman of the Australian Trade Commission (AUSTRADE) for 7 years, and also served as an adjunct professor in the Centre for Entrepreneurship of the Graduate School of Business at Swinburne University, Melbourne and guest lectures at INSEAD and Melbourne University. Roger holds a Bachelor of Arts degree majoring in Economics and Fine Arts and a Master of Arts with honours in Philosophy at Melbourne University. 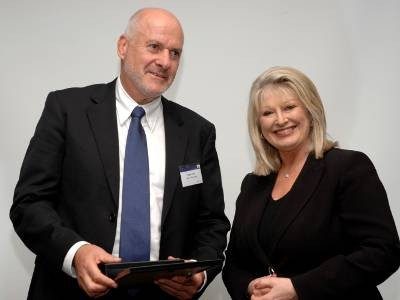 Roger Allen with Senator Helen Coonan, Minister for Industry, Communications and Information Technology and the Arts