The 2004 Pearcey Medal was presented to Emeritus Professor John Bennett AO by Senator the Hon Helen Coonan, Minister for Communications, Information Technology and the Arts.

The presentation was witnessed by a distinguished audience of over 200 State and Federal Ministers, senior politicians, bureaucrats and I.T.T professionals, Pearcey Medallists and Pearcey Award winners, from every State and Territory, at a celebratory Dinner at the Australian Technology Park, Sydney, on 4 November 2004.

The Pearcey Medal commemorates the work of Trevor Pearcey, the Australian builder of the world's fourth, and Australia's first, electronic computer, which ran its first successful program in November 1949.

The 2004 medallist, John Bennett, is an outstanding pioneer in computing; in 1949 he was one of the developers of EDSAC, (which was the first stored program computer in the world in regular use) under the tutelage of Professor Maurice Wilkes at Cambridge University.

John Bennett had completed his first engineering degree in Brisbane in 1941. He spent the years 1942-46 as a radar officer in the RAAF and returned to complete two further engineering degrees after WWII. While on the staff of the Brisbane City Electric Light Company he was given the job of predicting electrical load flows armed with a desk calculator. By chance he had heard about the ACE computer being developed by the National Physical Laboratory in London so he applied for a research studentship to work on this project; the outcome was the job on EDSAC.

After three years at Cambridge Bennett was recruited by Ferranti Limited to work on the Ferranti MK1, the first stored program machine to be built by industry. His job was to build up a group to program likely user applications and to recommend changes to the MKL1's architecture to make programming easier.

In 1955 John Bennett returned to Australia as the country's first computer science professor at the Basser Computer Laboratory at Sydney University.

In Sydney John Bennett's career (until his retirement) in 1987 covered a wide variety of academic and industry contributions including the construction of SILLIAC, international activities with IFILP and work with the Australian Computer Society of which he was the Foundation President.

The Commonwealth Government DCITA, the NSW Government Dept of State and Regional Development, Multimedia Victoria, The Australian Information Industry Association, and the Australian Computer Society, were the major sponsors of the 2004 Pearcey Medal.

"Election campaigns tend to emphasise the divisions of opinion in our society, but one of the reasons that Australia is the envy of many other nations is that there are far more things upon which we agree, than there are that divide us.

One of those "things" is support for the Australian ICT industry and profession. This support transcends Party lines, and it transcends State and Federal boundaries.

We were very pleased that IT Ministers Lara Giddings of Tasmania, and Trish White of South Australia, accepted our invitations this year to become State Patrons of the Pearcey Foundation in their respective States, and I am very pleased to announce that Senator Helen Coonan and NSW Minister John Della Bosca have also now accepted our invitations to them to become Pearcey Patrons, and are therefore now Pearcey Fellows as well". 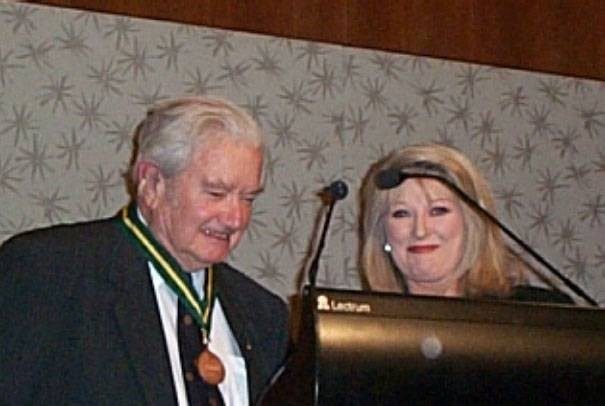