Industry stalwart, Tony Benson, was awarded the 2001 Pearcey Medal in recognition of his life-time commitment to the Australian IT industry. The highly prestigious award was presented to Mr Benson by the NSW Minister for Information Technology, Kim Yeadon, at a special dinner in Parramatta on Friday 9 November 2001.

The event, which was jointly sponsored by the ACS, AIIA and the NSW Government Office of IT, also saw IT pioneers John Bennett and Frank Hirst become the first people inducted into the Pearcey Hall of Fame.

Tony was an ACS Fellow and Honorary Life Member in recognition of his contribution to the society since joining it as the NSW Computer Society in 1964.

Later, in Perth, he chaired the organising committee for the ACS' 1976 national conference and went on to become WA Branch Chairman, national Vice President and then President of ACS in 1978 and 79.

Working closely with the WA Institute of Technology to set up the first ACS student mentoring program in Australia, he also joined the board of the ACS Foundation after its foundation in 2001.

"He was a gentleman. He was loyal in every way, to the company and his friends. He was a dreamer, believing that everything could always be done a better way. He was a mentor to many people; his door was always open. He was highly intelligent. He was a pioneer in so many ways. He was honest, sincere and trustworthy - he never wronged a person in his life. And above all, he was a friend.

"Without question, he won the respect and admiration of his peers. That was our Tony." His Pearcey Medal citation in 2001 included: "At Sydney University Tony majored in mathematics and chemistry, graduating with Honours In 1957. In his honours year he used one of the first computers in Australia, Silliac, for research in crystallography.

"This proved so fascinating that he changed his plans for an academic career in theoretical chemistry to one in computing and in 1960 resigned from a Teaching Fellowship at the University of NSW to join NCR as a Scientific Programmer.

"His first project was the analysis of 30 years of accumulated data held by the Ionospheric Prediction Service to forecast the radio frequencies to be used to reach the northern hemisphere. This was a massive data capture task using adding machines and punched paper tape, with a linear regression program for the forecasting.

"He attended the first NCR 315 international programming course held in Dayton Ohio in 1961 and installed the first two 315 systems in Sydney and Melbourne, training programmers in NCR and its first customers."

In Daytona, his path crossed again with Dr Peter Jones, who recalls being offered the chance to use Orville and Wilbur Wright's shower in the Bishop's House there.

"NCR maintained the old house as a heritage site for the flight pioneers, and in it was a shower with circular sprays which the brothers used, first as bicycle makers and later as aviators, to ease the bruising which many crashes brought.

"Tony organised my permission to use it; it was thrill, and typical of the kindness of a man who did so much to promote our industry in Australia, particularly our small businesses, the people who have served it."

Tony Benson held executive and board positions with Grouputer Corporation and Grouputer Solutions, a founder of bullant Technology, marketboomer, Prism International, the Australian Centre for Advanced Computing and Communications (AC3), the Australian Information Industry Association and was the first chairman of Software Engineering Australia (SEA).

FOOTNOTE: Unfortunately Tony passed away in February 2005 after a brief struggle with cancer and is survived by his wife Georgette and five children. See also Computerworld tribute. 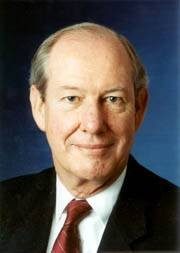