Dr Peter Jones became the first Pearcey Medallist to a standing ovation from the I.T. industry at the 1998 AIIA Annual Industry Dinner in Sydney on the 12th of November.

Peter passed away peacefully with his family present on 26 August 2016 in Sydney, some 18 years after being recognised for his contributions to Australia and the ICT sector in particular. Peter was also recognised by his alma mater Sydney University for his contribution to computing. For more details refer http://sydney.edu.au/arms/archives/history/HonJonesPD.shtml

At the 1998 awards dinner, the audience, including the Minister, Senator Richard Alston, Shadow Minister, Senator Kate Lundy, and the Managing Directors of many of Australia's major I.T. companies, listened intently to the introductory speech by Pearcey Foundation convenor Ian Dennis and to Peter Jones' acceptance.

The Pearcey Foundation was formed earlier that year to honour Australia's contribution to the world's I.T. industry. Trevor Pearcey built the world's oldest surviving electronic computer in 1948, the fourth in the world, and played a key role in the development of Australia's I.T. research, industry, and profession until his death in January 1998. Pearcey was the first head of CSIRO computing, first Dean of Computing at Chisolm, later Monash University, and a founder of the Australian Computer Society.

The first Pearcey Medal was awarded to Dr Peter Jones for Distinguished lifetime achievment and contribution to the development and growth of the Information Technology professions, research and industry.

Dr Jones first worked on a computer in 1951, at Sydney University. He was part of a team that developed one of the earliest supercomputers at Manchester University in the early 60's, and then he joined Control Data in Australia and the US.

He became Associate Professor of Computing at the University of NSW in 1966, and then oscillated between academia and the industry until the late 70's, at Control Data, Network Systems, and the Australian National University.

In 1979 he founded his own company, Techway, specialising in servicing the needs of large commercial, scientific, and government computer users.

Techway listed on the Australian Stock Exchange in 1993, since then Peter Jones has established another company, Home Communications, which develops and commercialises internet applications, as well as serving on the board of Softway Pty Ltd.

Jones is a Fellow of the Australian Academy of Technological Sciences and Engineering, was a member of the then Prime Minister's Advisory Committee on Science and Technology from 1984 to 1990, and has served as the Chair or Member of many other significant industry and scientific bodies.

He was nominated and selected by the members of Pearcey Foundation board after deep consideration as a person who, like Trevor Pearcey, has, by hard work, intelligence, and dedication, made a major contribution to Australia's and the world's I.T. industry and research and gives us a further example of what Australians can and have achieved in this industry.

In making the presentation, Ian Dennis made specific reference to Pearcey's 1948 prediction that "an automatic encyclopaedic service operated throughout the national printer or telephone system, will one day exist" Now known as the World Wide Web, it was first postulated in Australia.

He went on to say "If you read US or European histories of our industry, you will find little or no recognition or acknowledgement of Australia's contribution, so exemplified by Trevor Pearcey.

"Australian schoolchildren, and unfortunately too many Australian politicians, seem to assume that all I.T. comes from the USA, and that the Internet was invented by Bill Gates. This leads to the erroneous belief that the only valid policy advice is provided by imported consultants, and that all Australians can do in I.T. is be good consumers"

Dennis then called on his audience, saying "We in the I.T. community have a duty to refute these fallacies, and to set the record straight.... not only to ensure a true history, but also to emphasise the undeniable quality of Australians in I.T. research and industry, our continuing capability to make a major contribution to the global I.T. industry, and to encourage our politicians to support our industry more appropriately in the future". 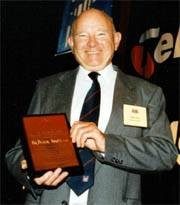