1 Dec 2016, Sydney NSW: Australian serial entrepreneur Stephen Baxter was presented the 2016 Pearcey Medal at a gala dinner at Star City in Sydney on Thursday evening. The award was presented by Adrian Turner, CEO of Data61, which is also the principal sponsor of the Pearcey Medal program.

Steve Baxter is best known for his Brisbane-based startup accelerator River City Labs. He started his first company SENet in 1993 and was a cofounder of PIPE Networks with Bevan Slattery. He is responsible for initiatives such as River Pitch, Right Pedal Studios and the Start-up Catalyst program to encourage the younger hi-tech entrepreneurial generation. He is also a been a keen participant in industry associations, looking at ways to address the challenges all new technologies encounter in their early days of rollout.

Steve's high profile on Australia's well known Shark Tank TV program is a clear demonstration of his desire to raise the fundamental role of hi-tech in our nation's future.

At the national Pearcey Awards evening, two eminent individuals in the Australian computer industry were elevated to the Pearcey Foundation's Hall of Fame for their lifelong contribution to the ICT sector:

Canberra-based Robin Eckermann is acknowledged as the architect of Australia's first broadband telecoms glass fibre-based network, TRANSACT, well before the NBN. In addition to Robin's association with the University of Canberra and the many telecommunications and associated national government advisory boards he sits on, Robin

Perth-based Jim Ellis OAM has dedicated the last 30 years to promoting the tech sector in WA through roles on advisory boards of all of the major WA tertiary education institutions. He was founding Chairman of the WA chapter of  the Australian Computer Society, and founder of WA's leading ICT awards program, WAITTA, in 1993.

Aaron is highly active in many other entrepreneur related groups in Queensland. He taught himself coding at the age of eight, and has started 14 businesses since the age of 16. One of these Start-ups was Arinda Internet, a backend cloud-based ISP billing and authentication system for public Internet access, which he grew to 6 million users with over 2000 points of presence in nine countries.

The Pearcey Foundation joined with the Australian Computer Society for a combined gala national awards event incorporating the Pearcey Awards with the ACS National Disruptor Awards.

The Pearcey Foundation is a not-for-profit entity established in 1998 to recognise important and influential figures in Australian ICT. Each year it awards several national awards to outstanding individuals drawn from across the industry:

The Pearcey Foundation promote the importance of the ICT industry and its pioneers to the Australian community. Dr Trevor Pearcey, in whose honour this foundation was named, was the architect and leader at CSIRO of the team which in 1949 constructed Australia's first (and the world's fourth) programmable electronic digital computer, CSIRAC. Please refer to www.pearcey.org.au for more details on the Foundation.

2016 Pearcey Medallist and Hall of Famers

Tech start-up investor Steve Baxter was born in Cloncurry and raised in Emerald, in the Queensland central highlands. He left school at 15 and enlisted in the Australian Army's apprenticeship program.

In 1994, at the age of 23, Steve put his life savings of $11,000 on the line to launch his first start-up, the pioneering internet service provider SE Net, from the spare room of his Adelaide home. While building SE Net, Steve was involved in early Australian Internet community work with committee appointments to the South Australian Internet Association, the Australian Domain Name Authority (forerunner to AuDA) and the IIA.

In 2001, Steve teamed with schoolmate Bevan Slattery to launch his second start-up, PIPE Networks. In 2010 PIPE Networks was acquired by TPG Group for $373 million. Steve's work in rolling out high speed dark fibre networks across Australia drew international attention and in 2008-09 he spent a year working with Google in California leading a project to deliver high-speed telecommunications systems across North America.

Since returning to Brisbane five years ago, he has become a major early-stage investor, mentor and advocate of Australian tech start-ups. Steve has invested or provided funding for over 20 start-ups or early stage companies, with a focus on the communications and technology space.

Steve's ICT advocacy dates back to the early days of the Internet. He continually works to introduce the general community to the concepts behind business, investment and the ICT industry as evidenced through his media presence and participation in television notably as a Shark on Channel 10's entrepreneur's show Shark Tank. He is also a founding board member of StartupAUS.

Robin Eckermann has been a pioneer and visionary in the Australian Information and Communications Technology (ICT) industry for over fifty years. He is an independent telecommunications consultant and an Adjunct Professor in network and communications technologies, business models and project management, at the University of Canberra.

From 1996 to 2000, he led the development of TransACT through its incubation phase, and from 2000-2003 during the rollout of TransACT's FTTK/VDSL network, served as the company's Chief Architect. At that time it was considered the most advanced broadband network in Australia. Since 2003, he has been actively involved in most of the pioneering FTTP (Fibre to the Premises) initiatives in Australia, and has contributed to policy deliberations at federal, state and local government levels.

Robin has had many other national and local leadership roles. including President of Smart GriD Australia, an organisation tasked with the modernisation of Australia's electricity grid, member of the  Regional Telecommunications Independent Review Committee and as a consultant to the Smart Internet Technology CRC.

Jim Ellis OAM has the distinction of having programmed a valve computer in 1962 as part of his mathematics degree in the United Kingdom, thus forging a tenuous link with Trevor Pearcey and the very early computers which he developed.

Jim spent the first two decades of his career working on early mainframes in the United Kingdom, Eastern Europe, Russia and South East Asia before migrating to Perth, Western Australia in 1981.

He has dedicated much of the last three decades to community service. His voluntary work includes being the founding Chairman for the WA Chapter of the Australian Computer Society Foundation, as well as being a member of the WA Branch Executive Committee of the ACS. He was made an Honorary Life Member of the ACS in 2001.

Under the auspices of the ACS WA, Jim initiated an awards function for high achievers in IT in 1991 now known as WAITTA (Western Australian Information Technology and Telecommunications Awards). WAITTA is the premier IT event in Western Australia and 2016 marked the 25th anniversary of this prestigious program. Jim's commitment to awards encompasses being chief Judge at the iAwards, and a member of the Executive Committee of APICTA (Asia Pacific ICT Awards).

Jim is Chair of the Advisory Board, and a spokesperson for, the Autism Academy for Software Quality Assurance (AASQA) at Curtin University of Technology designed to assist many of the 3,000 Australian youths living on the autism spectrum to leave school each year with a post school transition plan.

He has assisted in the development of three Schools of IT within WA tertiary institutions. In 2008 his work for the IT community was recognised with the award of the Medal of the Order of Australia (OAM).

Aaron grew up on a farm and later moved to Sydney and also lived for a short time in the US. As a teenager, he loved programming and started a few small businesses. His parents had high expectations and so in addition to studying maths and science he also studied law. After graduating from University (UNE) and gaining experience as a consultant, he moved to Canberra and worked in several areas relating to the Intelligence Agencies.

In a change of career, he helped his brother open a restaurant on the Gold Coast. Here he wrote software to help run the business and saw the opportunity for a WiFi hotspot for their customers. In those days, this was novel and the software grew to integrate into many types of gateways and Internet kiosks, and expanded to also cover monitoring and billing. Over eight years, Arinda Internet became a significant international player in the early cloud based authentication and billing. When it was sold in 2012, it had over 2000 installations across 9 countries.

Having exited Arinda Internet, Aaron followed his passion to help other Entrepreneurs through mentoring, incubators, startup weekends and many other initiatives. He has helped hundreds of entrepreneurs and now spends a lot of time introducing startups into the US. 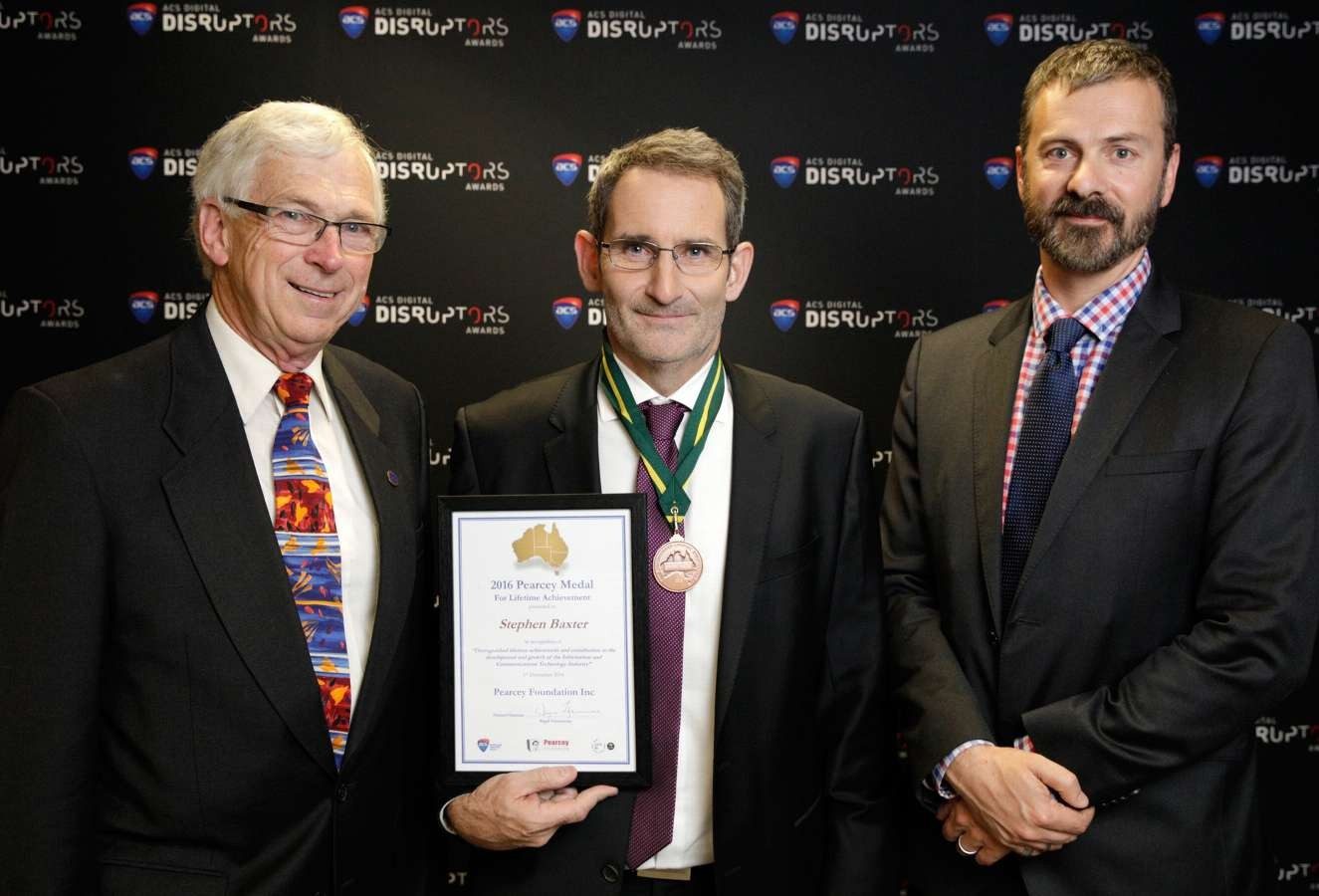