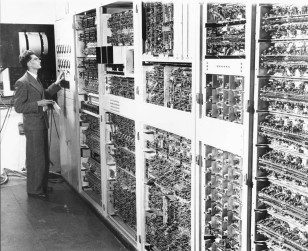 Photo: Trevor Pearcey in front of CSIR Mk1 in Sydney

in historical terms, CSIR Mk1/CSIRAC was one of the first stored program, electronic, computers.

Prior to 1948 various electromechanical machines (non-electronic computers) were built in USA and Germany. Early electronic, but not stored program machines, were ENIAC (USA) and numerous Colossuses (Colossi?) at Bletchley Park (UK).

It is generally accepted that the first stored program computer to operate was the Baby at Manchester in mid 1948. (This was the consensus at the 50th anniversary in 1998 where British, Australian and US historians celebrated these early computers including CSIRAC [1]). The Baby was enlarged into a larger machine by early 1949. One could consider this as a single project or as two different computers.

The second stored program computer - and the first to really do a job of work - was the EDSAC at Cambridge (UK) launched in mid 1949.

The first US stored program computer was BINAC. BINAC ran test programs through 1949. It was delivered in September 1949. However, when delivered it was not considered a success. See Wikipedia BINAC.

The Australian CSIR Mark1/CSIRAC ran test programs in November 1949. Evidently the power restrictions caused by the 1949 Australian coal strike impeded the development of the CSIR Mark1.

The question of first 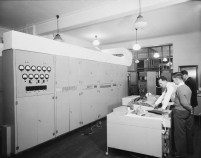 Photo: CSIRAC at University of Melbourne 1956

Some computer historians have suggested that the apparent failure of BINAC means that Australia beat the USA in the race to have an electronic stored program computer. However, if the event of significance is the first test program, then BINAC was ahead of the CSIR Mark1/CSIRAC, even if the BINAC was not ultimately a success. It took another year or so to develop CSIR Mark1 into a fully working machine.

In this context, it is generally agreed that:

Other notable aspects of CSIRAC

CSIRAC was a ground breaking machine in many respects.

In comparison to today's computers 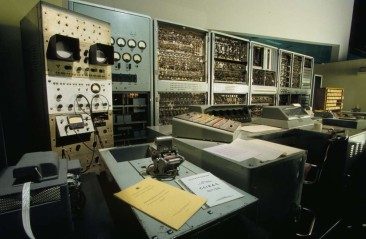 In it's day, CSIRAC had awesome power:

[1] Thanks to Dr Peter Thorne for his insights. Peter is an eminent historian and researcher in Australian computing, Board Member of the Pearcey Foundation and Honorary Associate at Museum Victoria. Previously, he has was Head of the Department of Computer Science at The University of Melbourne and Deputy Dean of the Faculty of Engineering. In industry, Peter was Chair of the Royal Society's Burke and Wills sesquicentenary programme and has been a member of numerous State and Federal advisory boards. 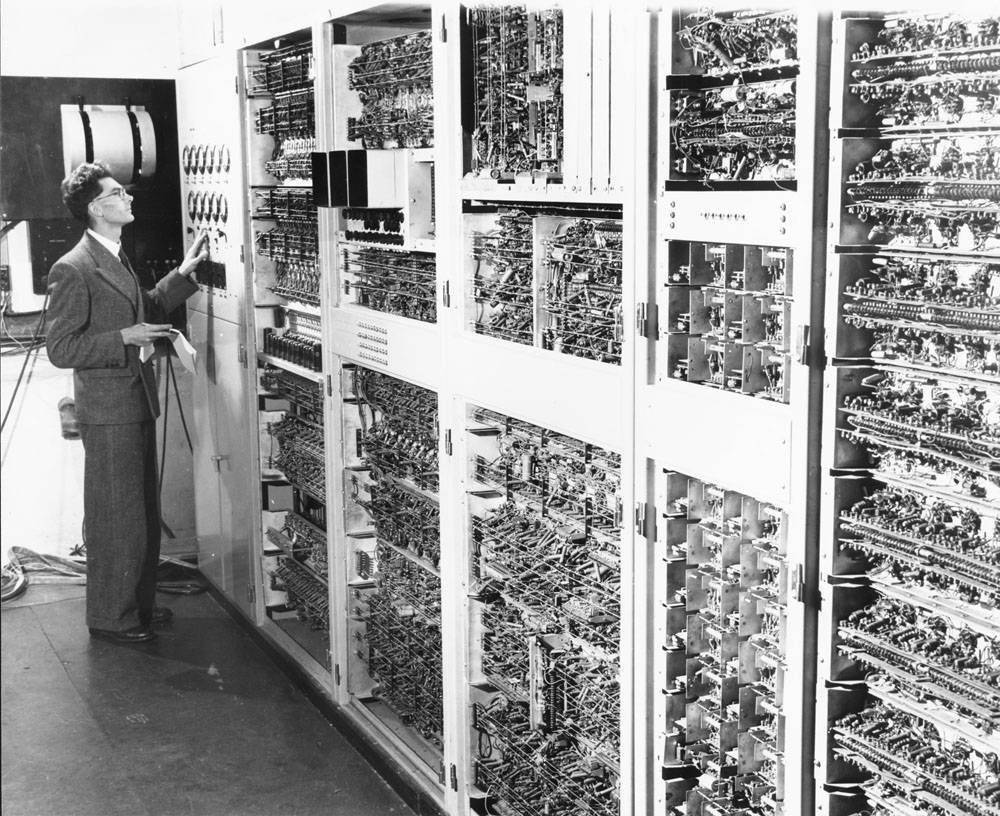 Trevor Pearcey in front of CSIR Mk1 in Sydney 1952