"I first saw CSIRAC when I was in Melbourne on holiday recently," said ICT Centre Director Dr Ian Oppermann. "I was truly inspired by its complexity and power and hoped it would similarly move my colleagues so I wrote an excursion to the museum into our meeting schedule."

Dr Peter Thorne (who worked on CSIRAC when an undergraduate and decades later, while Head of Computer Science at the University of Melbourne, initiated and led the project to document the history of the computer and ensure its place in our nation's history) gave the visitors a guided tour of the computer. He reminded the visitors that the CSIR MK1/CSIRAC is the only intact survivor of the machines which launched the information age. Dr Thorne is also a member of the National Committee of the Pearcey Foundation named in honour of Dr Trevor Pearcey who led the team at CSIRO that designed and built CSIRAC in 1949.

Museum Victoria CEO Dr Patrick Greene dropped by and explained his connection with early computer history; he once lived in a property originally owned by Charles Babbage and he was later involved in the creation of the replica of the first stored program machine - the Manchester Baby.

Curator Mr David Demant then took the visitors behind the scenes to the CSIRAC collection in the museum store where the detailed archive of the computer's history is preserved, including original hardware schematics and program tapes. Initially shy before the rolls of tape and hand-made equipment (not to mention the famous screwdriver!), it wasn't long before gloves went on so the increasingly fascinated visitors could turn the pages of the manuals and logs Mr Demant had brought out for inspection.

"CSIRAC is a beautifully restored technology artefact of great historical significance," said ICT Centre Chief Scientist Dr Branko Celler. "I admit I was excited to be so close to one of Australia's great early achievements in computing and I hope it excites the next generation of ICT professionals. All of our staff should take any opportunity to visit this important exhibit." 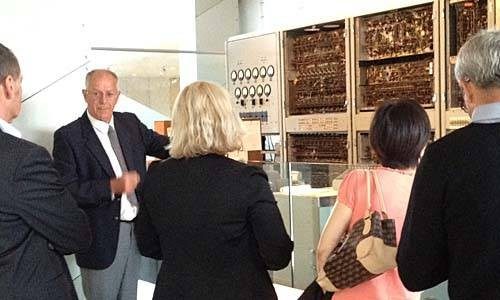