The 2015 Pearcey Oration was delivered by Mr John Grant, Managing Director of Data#3 and Chairman of the Australian Rugby League Commission. This was part of the Pearcey Awards held in conjunction with the ACS Disruptors Awards gala dinner held on Tuesday 17 November 2015 at the Sydney Star.

Good evening and thanks to Wayne Fitzsimmons for inviting me to give the Pearcey Oration.  I've never given an oration before so I had to go and look it up - 'a public speech characterised by a studied or elevated style, diction, or delivery'.  So - this should be interesting.

When Wayne approached me he suggested I was one of the few people in Australia who has 'overseen' the dramatic transition and transformation of the ICT sector from a technology group to an enabling industry that pervades our economy across all sectors and that my roles as a successful entrepreneur, head of the AIIA, government adviser and now transitioning out of the sector to focus more on my sporting interests qualified me well to share my views as an industry leader.

He suggested that you'd appreciate some reflections and perspective on where we are as a nation and where we are headed in terms of adapting to the technology disruption and revolution we are in the midst of.  So let me try to do that - well some of it at least.

It's interesting isn't it that when you're in the middle of an exciting and demanding executive career, you don't give much thought to what's been - it's always about what's next.

But as I near the end of my executive career but not my working career note, and when I'm not chin deep in the day to day thrust and parry of rugby league in Sydney as I am at the moment, increasingly I am reflecting on how I've spent the last 36 years in this industry.

So let me share some of those thoughts with you - the first a little trip of self-indulgence on my 33 years in Data# 3 and the second, some observations on the last 25 years I've spent in some way working to advance our industry.

Apart from being a very long time, I've been fortunate to have had a lot of roles that have allowed me to see the business from a number of perspectives - salesman, sales director, partner, services director, credit collector, more on this in a moment, CEO and MD - over a period when the business has grown from 16 odd people when I joined to over 1000 today and from $5m in revenue to around $860m today.  Over this period, there are a number of things in three broad categories that stand out for me:

What I'm proud of as I look back.

In terms of the big moments that have helped define Data# 3 today:

I feel genuine pride in Data# 3 and what I've been able to contribute:

One of Data#3's Directors, Ian Johnston at one time referred to me as the song and dance man - in a nice way he assured me.  I have got a bit of the showman in me but I've been proud of what I've done on my feet at Juice IT, at our internal kick-offs and in customer forums to inspire our people to do their best every day and to assure customers that we're the partner for them.  I believe a critical leadership skill is clear and powerful communication

Helping develop a supportive but demanding culture by providing clarity of vision - where we are going; articulation of a set of values defining how we should behave; and being specific as to the outcomes we want for our stakeholders - shareholders, staff, customers and partners

So much for the self-indulgence.  Thanks for listening.

So to our industry.

When I chaired the AIIA, together with our then CEO and one of my great friends, the late and much missed Ian Birks and the board, we championed the NBN.  Ian led this vigorously but in his normal considered way, and at one stage, Stephen Conroy commented to him that this was the deciding factor in their re-election - maybe it was, maybe it wasn't, in any case we took it.  But it was a very exciting time and one filled with great promise.  As was most of the times Ian and I spent together.  He was one of the industry's true professionals and a great friend to so many.

It was at this time that we tried to change the industry narrative.  The ICT industry was perceived primarily as a bunch of technologists focused on technology by those outside of it and largely pigeon holed into either procurement or innovation.

We built a model that attempted to change this thinking to put innovation not alone as an independent function by itself, but rather as part of a continuum that could increase wealth - of individuals and of our country.

We set this in a future context where the digital economy was the economy and proposed simply that if we increased wealth, we had choices and if we didn't increase wealth, our choices diminished considerably.

We challenged those who'd listen to us whether wealth creation was important.  Always of course they said yes.

With this as the overarching objective we suggested that the continuum to sustainable wealth creation started with the inputs of the right skills - those for the future economy; the right infrastructure - the NBN; and the right incentives and policies by government to drive investment.

And we proposed that with these inputs in place we would get innovation which would drive productivity which in turn would deliver global competitiveness which of course would create sustainable wealth.

It was and still is a wonderfully simple and elegant model the principle of which was a continuum not a disconnected series of activities.

Bottom line - it failed to gain any sustained traction.  Ian and I reflected on why it didn't over many a bottle of red wine.

The nub of the problem as we saw it was the intractable status quo - governments that aren't structured and can't operate as one interconnected entity to support such a continuum - if they were we would have had R&D and share option policy and legislation as part of innovation departments rather than in tax or finance departments; and an industry that had to keep the lights on and behaved more as a supplier than an enabler.

I excuse brave efforts by leaders in some of our major industry players when I say this, but in the main, we behaved and were seen like suppliers of goods and services.

But more than this, what we saw at the heart of this intractable status quo was a lack of leadership - both political and commercial.

When Kevin Rudd was elected in 2007, it was on a promise of a modern government in which technology would play a leading role - PCs in schools and ultimately the NBN.

But his government and he became subsumed in the GFC and the rest is history - from him to Julie Gillard back to him and then to Tony Abbot - so much promised and so little delivered.

A combination of the political system and individual personalities has created a political leadership vacuum for almost 10 years.

And in the commercial sector, I know it's a little simplistic to say, but generally shareholder returns drive most strategies, with individuals and companies mostly intent on getting a bigger piece of the same pie rather than focusing on creating a bigger pie of which their piece will be by consequence, be bigger.

Under a different political system in New Zealand but with a true political leader in John Key, New Zealand's wealth has climbed remarkably over the last 10 years.

Is there anything to be learnt from them?

Well there is one similarity - John Key and our Prime Minister are both ex merchant bankers and you'd have to think they know how to make money i.e. create wealth, and that's a first for our country.

I guess we all feel very satisfied that 'one of us', well sort of, is now leading our country and that he 'gets it'. But will things be better in Australia under Malcolm?

I must say I have a real sense that they will be.

This was reinforced just recently when I heard what I consider to be the most powerful statement made by a Prime Minister in over 10 years - 6 words that stopped me absolutely still one morning when I was cleaning my teeth in a hotel room with one eye on the TV.

To a Vice Chancellor of one of Australia's leading universities on that other intractable issue of shifting university based research from a culture of publish or perish to one of driving commercial revenues, the Prime Minister remarked that, citing structural funding issues and the lack of major global companies investing in R&D onshore as the reason we're not getting traction around university research was a rather defeatist and dispiriting view and one which did not express the optimism of his students.

He then said the six powerful words - 'Frankly they'll lose faith in you'.

Just dwell on this for a moment.

'Frankly they'll lose faith in you'.

A leader using the power and authority that comes with leadership delivering a challenge to one of our pre-eminent educational and research establishments to not lose the faith of his constituents and to have a go.

This direct and clear call, indeed demand and expectation that we can and must do better gives me great hope.

And it's a clear call to all of us too.

To be positive, to be confident, to be optimistic that in this great age in which we live where the digital economy is increasingly becoming the economy, we are right in the middle of the greatest time in our lives.

The 2015 Pearcey Oration was given by John Grant, Managing Director Data #3 Awarded Pearcey Medal in 2010

Past Directorships / Board and Council memberships 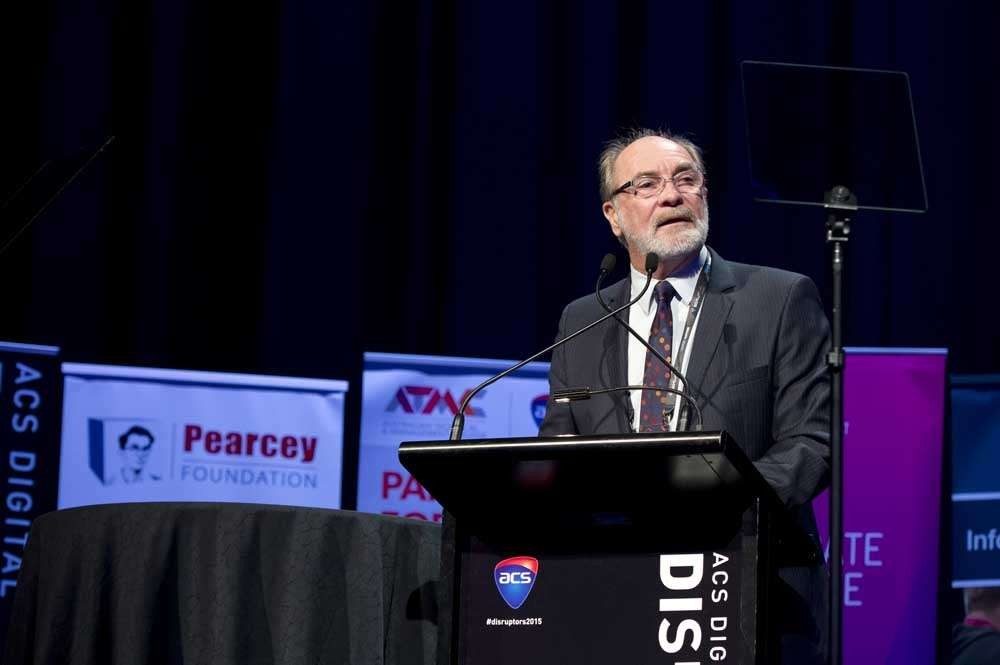