A huge opportunity arose in the heady days of Australian rocket science research in the mid-twentieth century for female mathematicians. Job opportunities for female mathematics graduates were not common apart from teaching but there was an alternative. In the 1950s a girl could become a Computer, that is, a human computer who performs mathematical calculations rather than a digital, electronic computer.

Rocket research in Australia started in the late 1940s with the construction of a testing station at Woomera to launch rockets and a research facility at Salisbury, South Australia as part of the Long Range Weapons Establishment (LRWE later WRE)*. The rocket tests were filmed on a special camera called a kinetheodolite (a combined theodolite and cine-camera device) and data was extracted from these films to record the telemetry points (10,000 on an average length film) and then it was put into a usable format. This process could take more than 120 hours per film. Initially results were calculated on desktop Marchant calculators. It was tedious, meticulous work and took hours of concentration. The answer was to employ female Computers. They were valued as consistent, accurate workers and were much cheaper to employ than men as the Federal public service rules paid women about two-thirds of the male rate for the same position well into the 1960s.

Starting with a small number in 1949, the increasing demand on their vital input led to the expansion of the workforce of Computers. By late 1949 the Adelaide News reported that more than 70 girls had applied for the 40 new positions on offer. The female team was led by Mary Whitehead who had a long career at WRE from 1949 until her retirement in 1982 including being sent to the US in 1960 to obtain star catalogue data. Her staff had diverse experience and education and came from all over Australia. In a Women’s Weekly article in 1958 they interviewed many of the girls and gave their stories including Mary Evans who had been a technical assistant at De Haviland Aircraft in Sydney, Ivy Flavelle from Western Australia had been a teacher and technical librarian at Australian Paper Manufacturers in Victoria and Janet Webster had been a mathematics assistant with the CSIRO Division of Radiophysics in Sydney. Many of the applicants had university degrees. They were also encouraged to continue their education with paid study leave and course fees for classes at the University of Adelaide. Even with extra studies, there was no career pathway for the female Computers.

Woomera had a largely male population and the girls had a busy social life often leading to romance and marriage. However Public Service rules required female staff to leave the workforce after marriage. The department lost well-trained, experienced Computers and had the double time-loss of training new applicants and cross-checking all their work. It was possible to return after marriage in a temporary position. Instead many chose to go to work for private contractors who happily employed married women and paid them more as well!

WRE soon looked to adopting analogue and digital electronic computers and they installed a digital electronic computer with stored programming designated WREDAC (the letters DAC for Digital Automatic Computer distinguished it from female Computers) in 1955 as well as analogue equipment. WRE installed an IBM 7090 in 1960. The female staff transitioned from the analogue to digital equipment and prepared data for the IBM computer.

The female Computers had a wealth of knowledge of data preparation and continued to be employed after digital computers were installed. They were valued for their deep understanding of the activities at Woomera and how the test results were processed and accessed. Their work was a vital component of Australia’s rocket science research.

Working on site at Woomera.

*The Long Range Weapons Establishment was established in 1947 and had its headquarters in Salisbury, South Australia and testing facilities at Woomera; renamed Weapons Research Establishment in the 1950s, then Defence Research Centre Salisbury in 1979 and in 1987 to Defence Science and Technology Organisation Salisbury.  Government archival records listed at http://guides.naa.gov.au/records-about-south-australia/chapter15/15.4.aspx

Morton, P., Fire Across The Desert – Woomera and the Anglo-Australian Joint Project 1946-1980. Dept of Defence Science and Technology, Canberra 1989. https://www.dst.defence.gov.au/publication/fire-across-the-desert Accessed 28 May 2020 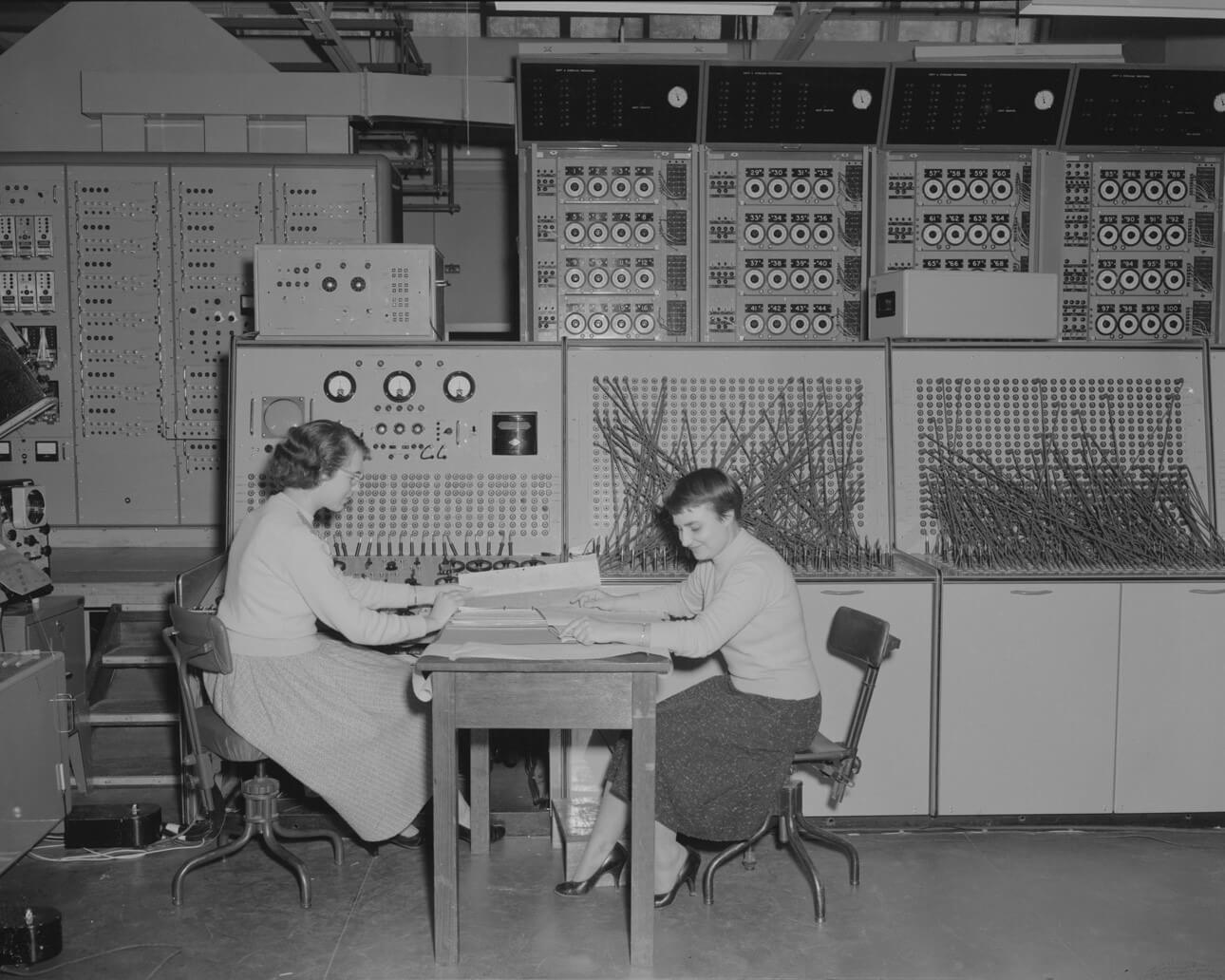