Background To The Pearcey Institute July 2015

The Pearcey Foundation (PF) has long envisaged the establishment of an Australian digital economy research institute - the Pearcey Institute (PI). It would be an independent multi-disciplinary studies institute capable of analysing the strategic economic impact of advanced technologies on our nation with particular emphasis on disruptive technologies that the ICT sector continues to introduce globally.

From its inception, the Pearcey Foundation has undertaken to organise and participate in forums, roundtables and public debates on issues of national ICT importance. The Foundation is able to do this as it is completely independent from any vested interest. It leverages the "good will" of ICT individuals who are passionate about steering Australia into a prosperous digital future.

Through the 2000s, the Pearcey Foundation ran a series of colloquiums to bring industry, academia and government together to discuss issues of national importance. Many systemic problems were identified and these discussions gave a voice to the "big" picture problems that Australia may face if it doesn't embrace the ICT revolution.

For details see - Colloquiums and Roundtables

In 2011, the Colloquiums and roundtables evolved into Australia 3.0 which became an all year round activity and organised into major industry verticals.

Australia 3.0 has brought together representatives from industry, government, research and academia to discuss the impact and the potential for transformation of the Australian economy by digital technologies viz. Mining, Government Services, Health and Infrastructure. Sponsored by both industry and government and engaging over 1500 in our Yammer online roundtable and forum events there is an appetite to address these issues. See www.australia30.com.au

In April 2008 the Foundation submitted a paper to the Innovation Review Committee chaired by Dr. Terry Cutler.

In February 2015 the Pearcey Foundation made a submission to the ICT Statistics Review. We proposed an economics institute to accurately measure the impact of ICT in the Australian Economy which would form the basis of much stronger government policy initiatives. The 2015 ICT Statistics Review is a joint project between the Department of Communications' Bureau of Communications Research (BCR) and the Australian Bureau of Statistics. The Department of Finance and the Department of Industry and Science are closely involved in the review process.

We believe the Pearcey Institute would be an important independent element of a national 'high tech eco system'. Australia needs to create such bodies to ensure the digital economic strategy our nation pursues, evolves in a robust and competitive environment. It is our opinion that the institutions responsible for informing the national debate on the digital economy, need to be arms-length from the prime national data collection body (ABS), and related government institutions - preferably located in an academic institution of high standing in the Australian ICT sector.

Discussions continue with key partners to establish the Pearcey Institute and we encourage you to contact us if you are interested to learn more. In overview, the discussions have highlighted the following areas.

Australia's challenge is to maintain a competitive edge in an increasingly online digital world and with an ageing population. Productivity in manufacturing has increased dramatically since the dawn of the industrial revolution. We are only just beginning to understand how to drive productivity in the digital economy. A focus on productivity growth in the digital (services) economy means taking advantage of advances in information communications technology, as well as increasing use of data available from government, industry and citizens.

It has become clear that there are pressing policy questions for which there simply is not sufficient data to enable thoughtful policy choices. The Pearcey Foundation believes that a clear opportunity exists for companies to create significant value by continuing to digitally enabling their current business models, or by adopting new disruptive business models targeted at ever more refined customer segments. Likewise, government faces challenges in public sector innovation and managing citizen expectations. In order to benefit from this disruption, Australia must produce and commercialise intellectual property and new technology for digital transformation, as well as developing a supportive and considered policy framework.

The formation of the Pearcey Institute (PI) will provide a multidisciplinary research capability and policy advice to support the development of Australia's digital competitiveness. It plans to play a vital role in preparing the nation for the revolutionary changes wrought by the digital world. Key characteristics of the Institute are:

The economic potential and the disruptive impact of digital innovation upon Australian society are profound. Disruption of established business models is accelerating. Existing businesses have to cope with change and Australia must have the capability to invent and finance disruption itself for the sake of economic competitiveness and growth. 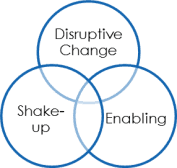 The work may be controversial at times but in general it is envisaged most projects will have a mix of three prime characteristics (as shown below) so recommendations will be founded on sound data and analysis.

The Pearcey Institute will be an incorporated entity with a Board, a CEO and a small number of full-time researchers. Most research will be carried out by the best available experts regardless of their institutional affiliation. Research teams will be flexible, multi-disciplinary and collaborate virtually.