The three day symposium opened on Tuesday 7 August, a cold and windy winter’s day. The biggest story in the newspapers that day was the arrival of Australia’s first jet bomber, the appropriately named Canberra, made by UK manufacturer English Electric (which was also an important early computer manufacturer).

The event was organised by Trevor Pearcey and David Myers, Professor of Electrical Engineering at Sydney University. Myers had developed a mechanical analogue differential analyser called the Integraph as part of his doctoral thesis at the University of Sydney in 1939.

Neither Pearcey nor Myers gives much credit to the other in their subsequent recollections of the conference, a symptom of the digital-analogue divide which was one of the key aspects of the event. The conference attracted 186 registrations, and included demonstrations of a range of computing equipment including Pearcey’s CSIR Mark 1, later to be renamed CSIRAC, which was at that stage still the only digital computer in Australia.

A number of commercial attendees displayed a range of accounting machines and scientific calculators. Star attraction at the conference was Professor Douglas Hartree, an early British computer pioneer who was the first civilian to program ENIAC, the first computer in the USA, when he visited the machine on a trip to the US in the northern summer of 1946. Hartree was the intellectual driving force behind many early British computers.

The list of attendees to the Sydney conference and the organisations they represented gives a good idea of where interest in ‘automatic computing’ was coming from at the time. It was mostly universities, CSIRO, and other government research stablishments, but there was a smattering of other government departments and calculating machine manufacturers and suppliers who were interested in the practical uses of the new technology.

A full list of attendees and the organisation they represented is a who’s who of the Australian computer industry at its inception. Many of the names went on to significant careers in the field. It is a reflection of the times that it was very much a boy’s club – just 16 of the attendees were women, and all of them were unmarried.

Hartree presented four of the papers at the conference, as did Trevor Pearcey (one of them with Maston Beard, he did most of the construction work on the CSIR Mark 1). All the presentations were long on technical detail and theory, with little on the practical application of computing. The conference attracted little interest outside of the mathematics and engineering community, but it was seminal to many attendees.

In his keynote address, ‘Introduction to Automatic Calculating Machines’, Hartree made a distinction between ‘instruments’ (analogue devices) and ‘calculating machines’ (digital devices), and outlined the strengths and weaknesses of the two approaches. He described the analogue differential analyser he had worked on, and recent advances in digital computing, including storage Hardware.

Three of Pearcey’s papers at the conference were about the Mark I, which was to remain the only digital computer in Australia for four more years. His fourth paper was on programming punch card
Machines.

David Myers wrote many years later that the conference “was a turning point in Australia and that after that time computing became increasingly a study in its own right rather than a plaything of specialists. Anyone wishing to consider the state of the art at the end of the first half of this century would be well advised to read the report of that conference.”

The report runs to over 200 pages. It can be found in some university libraries and in the National Library of Australia. Its official title is ‘Proceedings of Conference on Automatic Computing Machines’. (August 1951, CSIRO). Museums Victoria’s website has a good summary of the event at
collections.museumvictoria.com.au/articles/2718 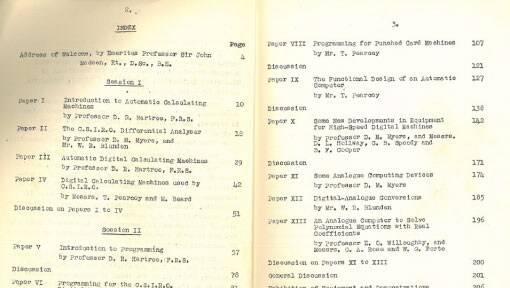 Index to the Conference Proceedings