Celebrating the birth of Computer Science in Australia

On 7-9 August 1951, the first computer conference in Australia, and one of the earliest in the world, was held in the Department of Electrical Engineering at the University of Sydney, and jointly convened by the Department (through Professor David Myers) and the CSIRO Department of Radiophysics (through Trevor Pearcey).

It was a very significant event in Australian computing history, and amongst its 186 attendees were many who would go on to become significant players in the Australian computer industry. The attendees were from universities, government departments, and industrial and commercial organisations from all Australian states. 13 of the attendees from CSIRO were human computers — women. Although only a total of 16 women were in attendance at the conference, their presence acknowledged the beginning of the recognition of women to computing.

Professor Douglas Hartree from Cambridge University, who was the international guest speaker, delivered the opening papers at the conference. Prof. Hartree was a leading authority on mechanical computation — he built the first differential analyser in England in the 1930s and opened the first English computing conference in 1949.

The conference was intended to introduce participants to the new developments in computing and programming techniques, and was an opportunity to display equipment — including CSIRAC. First named CSIR Mark 1, it was the fourth stored-program computer in the world and was built by Trevor Pearcey, Maston Beard and their team at the Division of Radiophysics. This new high-speed digital computer was demonstrated for the first time at the conference, and it even played music!

In the lead up to the Riding the Digital Wave Summit, Barbara Ainsworth (Curator, Monash University Museum of Computing History) has written about the ‘Conference on Automatic Computing Machines’ — the first computer conference in Australia.

Angie Abdilla is a Palawa (Trawlwoolway) woman based in Sydney. She founded Old Ways, New in 2016, where she works with Indigenous knowledge holders and Indigenous knowledge systems across the continent in the design of places and deep technologies. She has presented her published research on Indigenous Knowledge Systems, Robotics, and Artificial Intelligence at the United Nations Permanent Forum on Indigenous Issues and co-founded the pioneering international Indigenous Protocols and Artificial Intelligence symposium (IP AI).

Within academia, she lectures on human/technology inter-relations and interaction design. She is a Fellow of The Ethics Centre and an Advisory Board member of the CSIRO Indigenous STEM Academy.

Prof. Genevieve Bell Director, School of Cybernetics and 3A Institute

Director, School of Cybernetics and 3A Institute

Genevieve Bell is the Director of the School of Cybernetics, Director of the 3A Institute, Florence Violet McKenzie Chair, a Distinguished Professor at the Australian National University, and Vice President and Senior Fellow at Intel Corporation. She is a cultural anthropologist who completed her Master at Bryn Mawr College in 1991 and PhD at Stanford University in 1998.

Genevieve is best known for her work at the intersection of cultural practice and technological development. In September 2017, she established 3A Institute at ANU in collaboration with CSIRO’s Data61, with the mission of building a new branch of engineering to effectively and ethically manage the impact of artificial intelligence on humanity through better design and management of technology.

Genevieve is widely-published, holds many patents, and has an immense love of books.

Alisdair Faulkner co-founded, built and scaled the world’s leading Digital Identity company protecting 1 in 3 ecommerce transactions in the US and over 1 billion global accounts across 4 billion devices for the world’s largest global banks and brands.

Alisdair created a category, grew recurring revenues from $0-100M USD, resulting in a $830M USD acquisition by a FTSE 100 company, and then went on to manage the global fraud & identity organisation for US, Canada, LATAM, APAC, UK and EMEA.

Chris Ferrie is a father of four and happy husband. His day job is academic research where he follows his curiosity through the world of quantum physics. His passion for communicating science has led from the most esoteric topics of mathematical physics to more recently writing children’s books.

During the day, you will find him as an Associate Professor at the University of Technology Sydney and Centre for Quantum Software and Information. His research interests include quantum estimation and control, and, in particular, the use of machine learning to solve statistical problems in quantum information science. He obtained his PhD in Applied Mathematics from Institute of Quantum Computing and University of Waterloo (Canada) in 2012.

In 2006, Gernot founded Open Kernel Labs (OK Labs) for commercialising L4 microkernel technology. He served as Chief Technology Officer (CTO) from 2006–2010 and as a Director from 2006 until OK’s acquisition by General Dynamics in August 2012.

Liz Jakubowski is a digital leader experienced in building data platforms, managing stakeholder relations and communications. She has held senior executive and leadership roles across research and public agencies including CSIRO, NICTA, ABC & NSW Health and consulted with the private sector.

Over the last four years, Liz has led the development of the online platform, Ribit.net, which matches tertiary students with STEM or digital skills to entry level roles with innovative businesses. Ribit established a community of 40,000 students across every university and TAFE in Australia and 5000 of Australia’s leading employers. It was acquired by Stone & Chalk in 2020.

Ian has 27 years of experience in the ICT sector and has led organisations with over 300 people, delivering products and outcomes that have impacted hundreds of millions of people globally. He has held senior management roles in Europe and Australia as Director for Radio Access Performance at Nokia, Global Head of Sales Partnering (network software) at Nokia Siemens Networks, and Divisional Chief and Flagship Director at CSIRO.

Ian is regarded as a thought leader in the area of Digital Economy and is a regular speaker on “Big Data”, broadband enabled services, and the impact of technology on society. He has contributed to 6 books and co-authored more than 120 papers which have been cited over 3500 times.

Louise Schaper is a transformational leader driven by driving change and delivering outcomes in the health sector. She is improving health outcomes through digital health after witnessing the inefficiencies and unsafe practices that result from our reliance on a paper-based healthcare system. She is an evangelist for the transformation of healthcare through technology and information, and for building digital health capability across the system.

Louise is an innovator and a change agent who doesn’t sit still and whose passion and enthusiasm for health informatics is shaping a new future for Australian healthcare. She has almost 20 years of experience in, and applied passion for, digital health and leading people and organisations. With a background as an occupational therapist, she has a PhD in technology acceptance among health professionals, is a graduate of Stanford’s Executive Leadership Program, a Certified Health Informatician and a Salzburg Global Seminar Fellow.

Louise has delivered over 100 conference presentations, has written for academic and industry publications and textbooks, is host of the Dissecting Digital Health podcast and she is always online.

Richard White founded WiseTech Global in 1994 and has been CEO and an Executive Director since then.

Richard has over 30 years of experience in software development, embedded systems and business management, and over 20 years of freight/logistics industry experience.

Prior to founding WiseTech Global, Richard was Founder and Managing Director of Real Tech Systems Integration (provider of computer consulting and systems integrations services) and Founder and CEO of Clear Group (distributor of computer-related equipment).

Richard holds a Master of Business in Information Technology Management from the University of Technology, Sydney (UTS).

Richard is a UTS Luminary and a Fellow of UTS.

Jon Whittle is the Director of CSIRO’s Data61, Australia’s national centre for R&D in data science and digital technologies. He is also an Adjunct Professor at Monash University and was formerly Dean of the Faculty of Information Technology. Jon completed a BA in Mathematics at the University of Oxford in 1994 and his PhD in Artificial Intelligence and Software Engineering at The University of Edinburgh in 1999.

Jon was named CEO Magazine’s 2019 Education Executive of the Year. Prior to joining Data61, he was Dean of the Faculty of Information Technology at Monash University and is a former Technical Area Lead at NASA, where he worked on software for NASA space missions.

Jon is passionate about the role digital technologies can play in society. He has a world-leading reputation on how to adapt software development methods to fully take into account human values and ethics, so that we build software for a society we want, rather than one we get by accident.

Thank you to the following sponsors and supporters 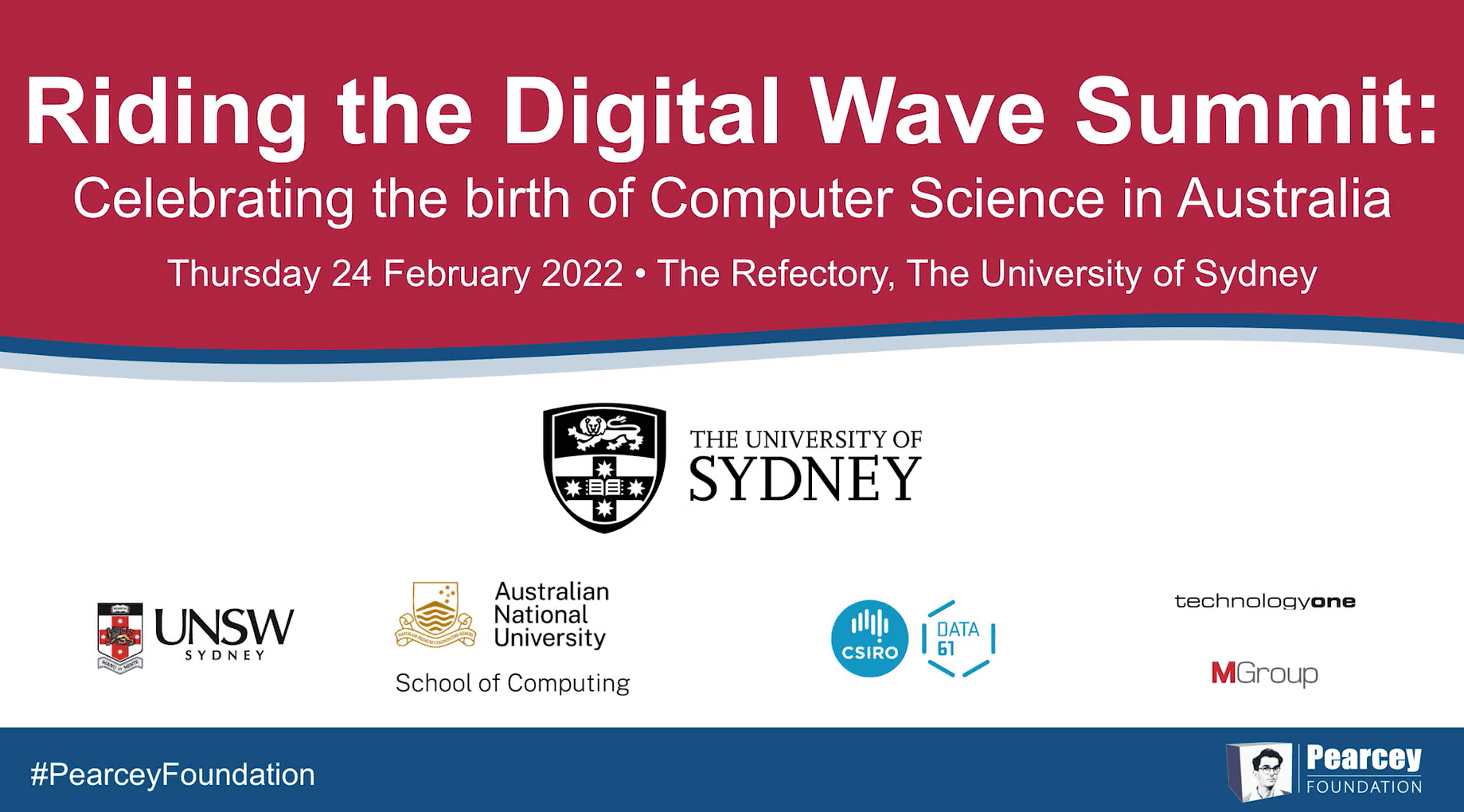